Mantras of Goddess Saraswati for Knowledge and Wisdom

Goddess Saraswati and Mantras for Knowledge

Hindu Religion has so many Gods and Goddesses. Saraswati is the consort of Lord Brahma and is the Goddess of wisdom and learning. She is the one who gives the essence (sara) of our own self (swa). She is considered as the personification of all knowledge. Her presence is elegant and she is depicted as wearing a pure white sari and seated on a white lotus representing purity and brilliance. She is also called 'Shwetambari' because of her fondness for white attire.

Sri Saraswati carries a Veena which represents mastery over the physical organs and actions where the veena is symbolic of life and strings are symbolic of feelings. The Book she carries is symbolic of Knowledge. The Crystal Beads Rosary having 50 beads on her hands is symbolic of concentration and transparency. The number of beads represents the number of letters of Sanskrit. She has complete knowledge of meditation and Yoga represented by bow and arrow. She has four hands representing four aspects of human personality in learning; mind, intellect, alertness and ego. The Swan reflects her power of discrimination and judgment. The white swan, lotus, cloths and white ornaments are symbolic of her chastity and purity. The Peacock is symbolic of worldly knowledge, fame and success. 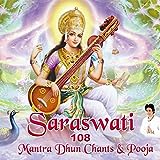 Goddess Saraswati is said to possess the powers of speech, wisdom and learning. Sarasvati Mantra is an important mantra and people pray to her for guidance and knowledge. Reciting the Mantras of Sarasvati are said to increase learning power. Saraswati Mantras can therefore help those who want success in Education and Career. The Saraswathi Beeja is 'AIM'.

May Goddess Saraswati, who is fair and beautiful like the jasmine-colored moon and whose pure white garland resembles frosty dew drops; who is adorned in radiant white attire, on whose arm rests the veena, and whose throne is a white lotus; who is surrounded and respected by the Gods, Protect me. May you remove my lethargy and brighten my life with the light of knowledge."

However, Goddess Saraswati is not worshiped much in temples. But she is worshiped during Saraswathi Pooja or Navarathiri in India.