As you know I have been playing with this scenario in my head based on the other 5 personal astrology planets (other than your sun/zodiac sign). When you first meet someone what planet do you see? Do you see the sun sign, moon sign, ascendant sign, etc? It is tricky to say what personal planet someone first sees in a person. Even so, it’s fun to try to take a go at it.

As I repeated many many times in previous hubs, my theory pretty much goes like this:

When someone first meet you (and vice versa) they meet your ascendant sign. After a while once they get to talking with you they meet your mercury and Venus signs concurrently. It is on this occasion you laugh, joke, and get to know each other more. After you both depart, deciding that you both like each other and want to meet up somewhere. You both suggest places to go and agree on a place. Later on they meet you, decide that they like you even more and meet several times with you. It is on these occasions when they meet your sun sign and your basic personality. You hang out, have fun and they get to see your Mars sign in action. After a while they get to know you more personally, soon becoming close friends. It is there that they get to see and notice more of your Venus and Moon signs, while getting a taste of the darker sides of your mars and mercury signs.

For the first part of this series I will be talking about Ascendant/Rising, and Mercury, in the zodiac sign of Scorpio. This does not specifically refer to the sun sign in Scorpio (some similarities may apply however). For more about the sun sign, click here

Your ascendant/rising is Scorpio, so your first house will be in Scorpio and is ruled by Pluto. Remember that Mars was Scorpio’s traditional ruler and some people consider that Pluto and Mars both rule over Scorpio; though for this hub, Pluto will suffice. The Scorpio rising person is regarded as quite mysterious and magnetic. This is partially a stereotype and partially true. The Scorpio rising person is private and highly secretive (which makes sense why people will assume this). Some Scorpio ascendant person may come off as intimidating, repulsive, mean-looking and edgy. Other Scorpio rising persons may fly under the radar and maybe seen as quite shy, reserved and simple. While others will be seen as sexy, hypnotic, or crazy.

All these descriptions are true and show the extremes of the sign of Scorpio. One thing about Scorpio (in any planetary placement) is that nothing is ever simple and nothing should be taken at face value with them. This ascendant sign is quite sensitive and intense and they will find ways/methods to distract and shield their intentions, feelings and vulnerabilities. Some do it by appearing mean/tough, others sexy and confident, and others by appearing harmless and spineless. 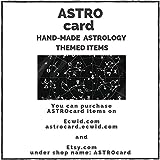 By the way a quick tip on how you can tell a Scorpio ascendant is by their outfit and particularly their appearance. Scorpios tend to wear black, dull colors (that don’t attract unwanted attention). For the Scorpio rising person that embraces colors and want their presence to be known they will be regarded as sexy/magnetic/repulsive.

Scorpio risers also tend to have dark features (even if you have light eyes/hair/skin). It is really about perception/attitude that makes their features/appearance appear dark. Dark features that doesn't necessarily denote race/gender is prominent eyebrows (aka bushy/dark ones), high cheekbones, angular faces, etc. Their eyes/stare can be quite prominent and penetrating too!! Think Betty Davis and Joan Crawford eyes (both have Scorpio ascendants).

Your Mercury is in Scorpio, so you communicate and think in a Watery/Plutonian way. The Scorpio is a fixed water sign ruled by Pluto. Here in mercury the sign of communication, Scorpio is an emotional and intense thinker and speaker that communicates in an intense, static way. Scorpio’s phrase is “I desire” and Scorpio’s glyph is the scorpion/eagle/phoenix.

First and foremost the Scorpio mercury person will not talk a lot, but when they do talk it will mean something (aka not be superficial in subject matter). If they do tend to talk a lot, you must realize they are not really talking about anything, and they won’t give much away about themselves. The Scorpio mercury person is sensitive, intuitive which makes them secretive, private and highly suspicious.

They are deep, intense thinkers and they tend to think much more then they speak. This can in turn make them seem serious, cynical, cruel, cold, and untrustworthy in attitude and in speech. This isn’t particularly truth nor is it particularly false, but it represents the nature of anyone with a personal planet (ascendant, sun, moon, mercury, Venus, Jupiter, and mars) ruled by Pluto. Remember this is a sign of extremes and intensity.

One thing to note is the mercury is Scorpio is on one side smart, deep, intuitive/psychic, with detective/researcher like abilities. They love to pick people’s brain, are good with details, and are good at keeping secrets. On the other side is that due to their sensitive, secretive, untrusting nature they may be seen as stubborn, passive aggressive and sharp tongue. This mercury sign tend to hold things in until they burst and can say some of the most cruel, mean things that can make even the coldest/least sensitive people cry.

Even so, this is rare sight to see and the Mercury in Scorpio person tend to control their thoughts and use their abilities on loved ones.

What planet (s) do you have in Scorpio?