Prayer In the Spirit - Should Believers Speak In Tongues?

There are some believers who think that they can get by just fine in their Christian walk without getting involved in that "Holy Ghost" business.

Now, that may be right because many believers have lived and died without ever praying in tongues.

But, what does Jesus say about it??

As Jesus was preparing the disciples for His death, burial and resurrection, He explained to them that although He was going away, He was not going to leave them alone or comfortless. He told them that He would pray, [ask], the Father and the Father would send them another Comforter who would be with them forever.

"And I will pray the Father, and He will give you another Helper, that He may abide with you forever— John 14:16

NOTE: (notice Jesus says "I" will come to you... this suggests the as Jesus and the Father are one, so are Jesus and the Holy Ghost one. These three are one)

Who is The Holy Spirit?

Jesus said that the disciples knew the Comforter. He said the Comforter was already with them and would be inside of them. Again, this speaks of the oneness of the Father, Son and Holy Ghost.

The Comforter that Jesus said the disciples were experiencing was He, Himself, Jesus. But when Jesus physically left, He promised He would come again, by sending them the person of the Holy Ghost. (These Three are One!)

Why Would Anyone Need A Comforter?

People would wonder why Jesus told them it would be better for them for Him to go away.

This would multiply the works of Jesus many times over. Where Jesus had to go to one place at a time. Those who are filled with the Holy Ghost could be dispatched throughout the entire world, thereby having the presence of God in many places at the same time.

The Holy Ghost is the one who takes the Gospel to the ends of the earth.

Jesus also said that the world, or those who were against Him could not receive the Comforter because they could not see Him and did not know Him.

"Nevertheless I tell you the truth. It is to your advantage that I go away; for if I do not go away, the Helper will not come to you; but if I depart, I will send Him to you. john 16:7

Up to this time, Jesus was everything to the disciples, He taught them, He consoled them, He empowered them; they were dependent upon His presence and all that came along with that presence. He could not leave them without filling the gap of His absence.

There was no way that they (or we) would be able to maintain their (our) faith, their (our), understanding and their (our), confidence without someone to replace His physical presence.

Have you received the Holy Ghost since you believed?

What is He Called?

Jesus calls the Holy Ghost the Holy Spirit, the Comforter as well as the Spirit of Truth. Jesus says that He, the Holy Ghost, would lead them in the way they should go; would guide them into all truth, would teach them all things and, would reveal the Father to them.

"But the Helper, the Holy Spirit, whom the Father will send in My name, He will teach you all things, and bring to your remembrance all things that I said to you. John 16:13

"However, when He, the Spirit of truth, has come, He will guide you into all truth; for He will not speak on His own authority, but whatever He hears He will speak; and He will tell you things to come. John 16:13

What Does This Have to do With Speaking in Tongues?

You are right to ask... The Holy Ghost is much more to us than "other Tongues". However, speaking in Tongues is the language of the Spirit. It is the initial evidence of being filled with the Holy Ghost.

Think About How You Pray....

How often do you find yourself groping for the right words when you pray in your native language? How frequently do you become frustrated and finally say, "Oh, Lord, you know the need, Amen." Of course He knows the need. He knew the need before you began to pray.

And, if it were sufficient to say, "Oh Lord, you know the need", then why are we praying anyway? It is because God knows the need that He asks us to pray. Don't be confused, there is as much need for us to pray in our native language as there is for us to pray in other tongues.

Thank God for giving us a way to communicate with Him that bypasses the weaknesses of our thought life. Thank God for the Holy Ghost and thank God for other tongues.

What Does Paul Say?

For he who speaks in a tongue does not speak to men but to God, for no one understands him; however, in the spirit he speaks mysteries. 1Corinthians 14:2

You decide... if you are communicating with God when you pray or speak in tongues, don't you think you should pray or speak in tongues? I think you should. Talking to God is a good thing. We often cannot gather our thoughts together well enough to talk clearly or effectively to one another, so, how effective is our communication with God when we pray in our native language? We say, "But God knows my heart." He most certainly does, but He is a God of speech, not a God of thought.

The Hidden Power of Speaking in Tongues
Personal testimony from Believers of how praying in tongues will give you the power you need to come out of depression, despair and hopelessness. And, most of all how to develop your spirit, increase your faith, and gain more intimacy with God.
Buy Now

He who speaks in a [unknown] tongue edifies himself, but he who prophesies edifies the church.1Corinthians 14:4

When a believer speaks or prays in other tongues, he or she is building themselves up. There is a scripture that says, be strong in the Lord and in the power of His might. Well, how are you supposed to do that? Can you "will" yourself to be strong? Usually in order to increase in strength you must exert some sort of effort. What kind of effort should you expend in order to make yourself strong in the Lord?

This scripture tells us that praying or speaking tongues edifies us. The term "edifies" means to:

Tongues Today No Different Than Yesterday

Many things change, but foundational truths do not. My house is built on a particular type of foundation. I can remodel, paint, add on, and a lot of other things, but I am still working with the same foundation. The Tongues in the book of Acts is/are the Tongues of the 21st Century.

Paul said, "I thank God that I speak in tongues more than any of you. Yet in the church....". This is obviously letting us know that most of his speaking in Tongues is outside of the church.

Read it again...He is making a comparison regarding what speech is best if you want to teach others.

So, What Should We Do?

The conclusion is that when desiring to teach others, it is best to speak in a language the hearer can understand.

What About this Interpreter Business?

There are two (2) types or rather categories of Tongues spoken of in 1Corinthians 12, 13 and 14. They are, The Gift of Divers Kinds of Tongues, and your individual prayer language Tongues. The confusion comes in because the scriptures surrounding speaking or praying in Tongues do not differentiate between these two types of tongues.

You will see these two gifts operating together in church services, among congregations of believers, etc.This Gift of Divers Tongues is what Paul was referring to in 1Corinthians when He said,

No more than two or three should speak in tongues. They must speak one at a time, and someone must interpret what they say. But if there is no interpreter, let him keep silent in church, and let him speak to himself and to God. 1 Corinthians 14:27-28

Order in The Church

For he who speaks in a tongue does not speak to men but to God, for no one understands him; however, in the spirit he speaks mysteries. 1 Corinthians 14:2

Like Paul, we should make it a practice to pray in Tongues regularly and for great lengths of time.

Do you pray in other tongues?

The Matter of Fact

So, when any born-again Christian asks God to fill them with the Holy Ghost they should expect to speak in other Tongues and should act on their faith by simply beginning to speak...

I come to you recognizing that I am a sinner in need of salvation. I believe that Jesus is the Son of God, that He died for me and that He rose from the dead. Jesus I confess you as Lord and I ask you to come into my heart. I receive you as my personal Lord and Savior according to Romans 10:9-10 which says, If thou shall confess with your mouth the Lord Jesus and believe in your heart that God has raised Him from the dead, you will be saved. For with the heart man believes unto righteous and with the mouth confession is made unto salvation. I thank you Father for saving me, for by faith, I am not saved. In Jesus' Name, amen.

I thank you that I have confessed Jesus as my personal Lord and Savior according to Romans 10:9-10. I am saved and I am your child. Jesus said that the Comforter, which is the Holy Ghost would be in me, that He would teach me all things and bring all things to my remembrance. Jesus also said that I would receive power after the Holy Ghost came up me and that He would guide me into all truth.

Well, I am asking you Father, to fill me with the Holy Ghost. I receive Him now by faith and, by faith I now have the ability to pray in other tongues. I understand that tongue are not the principle thing, but that they are the physical evidence of my being filled with the Holy Ghost.

I exercise my faith now Father, by opening my mouth and yielding to the Holy Ghost within. I thank you Father that I am now filled with the Holy Ghost right now, in Jesus' Name, Amen 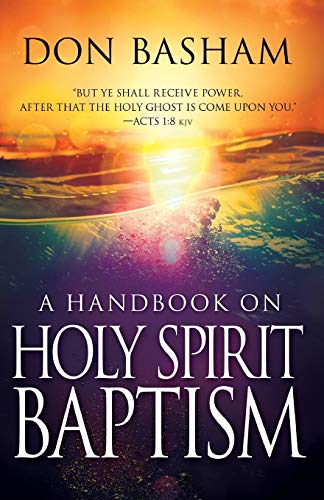 A Handbook On Holy Spirit Baptism
Frequently asked questions are asked in this easy to understand book about the Baptism in the Holy Ghost.
Buy Now