Prayer in the Spirit-Speaking in Tongues

Is it possible that this is the purpose of the controversy and confusion surrounding tongues?

I mean think about it. You discover a weapon of mass destruction that your enemy is indiscriminately distributing to any and all of his troops. He tells them it is an effective weapon, that they should use it frequently and it is available to all who want it.

You on the other hand have seen the increase in power the enemy has when this weapon is used. In fact, you have suffered massive collateral damage to a number of your strongholds as a direct result of those troops using that weapon. What would you do?....

Well, that is what the devil is doing with regard to praying in other tongues.

More About That Later

For now, let's just look at the videos made available through YouTube.

Note: *When you click on the video below, you will be asked to view it on youtube.com. Please do so because that is where I got if from. The link in the video will take you there.

A second study was done in 2006. The full study is found in Psychiatry Research: Neuroimaging Volume 148, Issue 1, 22 November 2006, Pages 67-71. The online link provides an abstract of the study. The entire article is not readily available online.To access the complete study online, you have to pay a fee. No doubt you can access the article in its entirety from the archives of the professional journal that it was written in. A summary of the study and its findings can be found in the New York Times written November 7, 2006. http://www.nytimes.com/2006/11/07/health/07brain.html?_r=0

What the Brain Scan Sees....

This particular study takes images of the brain of 5 women as they spoke in tongues. They found that the frontal lobe (the part of the brain that makes decisions and is involved in higher mental functions), along with the language portion of the brain is quiet when the women were speaking in tongues.

The women were normal, active churchgoers, they were not in a blind trance. The conclusion was that the region of the brain that drove the behavior was not discernible. In other words the study couldn't tell where the tongues were coming from.

Dr. Andrew Newberg,director of the Center for Spirituality and the Mind, who has just published a book, "Why We Believe What We Believe: Uncovering Our Biological Need for Meaning, Spirituality, and Truth," written with his colleague Mark Robert Waldman and University of Pennsylvania physician has done over a decade of study on the subject of prayer and its effect on the brain.

In an interview with Steve Paulsen entitled "Divining the Brain", Dr. Newberg had this to say regarding speaking in Tongues.

“Speaking in tongues is a very unusual kind of vocalization. It sounds like the person is speaking a language, but it's not comprehensible. And when people have done linguistic analyses of speaking in tongues, it does not correspond to any clear linguistic structure. So it seems to be distinct from language itself. That's interesting because we did not see activity in the language areas of the brain. Of course, if somebody is a deep believer in speaking in tongues, the source of the vocalizations is very clear. It's coming from outside the person. It's coming through the spirit of God. “
http://www.salon.com/books/int/2006/09/20/newberg

The findings in these studies are in agreement with what the Bible says about praying in tongues.The Bible says that when you are praying in tongues it is your spirit that is praying. Your mind is "unfruitful" or your mind doesn't understand what is being said. Although scientists cannot determine "what" part of you is praying, they do agree as to what part of you is not praying.

When I pray in an unknown tongue, my spirit prayeth and my understanding is unfruitful. I Corinthians 14:14 King James Version

For if I pray in a tongue, my spirit prays, but my understanding is unfruitful.
I Corinthians 14:14 New King James Version

For if I pray in tongues, my spirit is praying, but I don't understand what I am saying.I Corinthians 14:14 New Living Bible

For if I pray in an [unknown] tongue, my spirit [by the Holy Spirit within me] prays, but my mind is unproductive-bears no fruit and helps nobody.I Corinthians 14:14 Amplified Version

These are three witnesses of the fact of "Other Tongues" from unbiased sources. There are 6 separate scriptures in the King James Version of the Bible which clearly indicate a thing is to be established or proven by a minimum of 2 witnesses.

Well, here are 3 witnesses from the unbiased scientific community to the fact of praying or speaking in tongues. I hope this help some of you.

If you wish to continue this study, look for the next hub entitled, Prayer in the Spirit Part 2- What Are Tongues?

I come to you recognizing that I am a sinner and I need to be saved. I renounce the sin that has separated me from you. I believe that Jesus is the Son of God, that He died for me and rose from the dead. Jesus, come into my heart. I receive you now as my personal Lord and Savior.

Hubs You May Enjoy

Why You Should Speak in Tongues
Buy Now 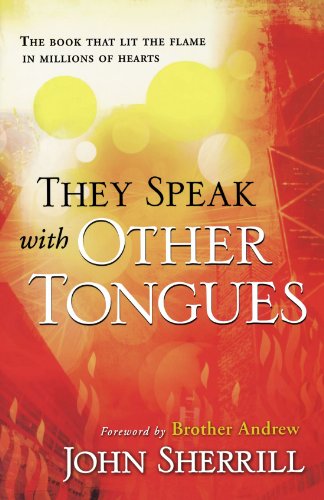 They Speak with Other Tongues
Buy Now