The Attack and Massacre at Saint Agustine, 1565 -- Beyond Pedro de Aviles

We recommend to read with this melody...Thanks! Video credits to Fritz51371

One of the most horrifying moments in American History took place in 1565. Way before Jamestown(1607), and Sir Walter Raleigh's Roanoke Island settlement failure (1587). There was this group of French Huguenots that dared to come to Florida to practice their own protestantism after religious persecution in Europe.

Spanish Conquistador Juan Ponce De Leon, who spotted a North American peninsula on April 2, 1513 gave it the name La Florida for the first time. Hernando De Soto (1539) claimed Florida once more, which derives from 'Pascua Florida,' or Flowery Easter, for the Spanish Throne.

Philip II, Spain's King since January 16, 1556, ordered the annihilation of this 'protestant sect.' An intrusion to a land blessed by Rome and its Pope. A heresy compared to let's see... compared to the most abominable act against the Inquisition (La Santa Inquisicion).

King Phillip decided to send one of his most brutal commanders : Don Pedro Menendez de Aviles, who next to 1000 troops sailed from Spain on June 26, 1565. At the same time the French King Charles IX, sent Norman Chieftain Jean Ribault to protect the French colony that Ribault himself helped to build in 1562, which was named Fort Caroline, in today's Jacksonville Florida. It was founded on June 22, 1564, under the leadership of René Goulaine de Laudonnière.

Arriving on Puerto Rico on august 9, 1565, Pedro Menendez knew of the French movements by local Caribbean Chieftains. Finally Menendez arrived on Florida's coasts on September 5, 1565. Four days later he founded Saint Agustin, and the first mass was given after a 'Te deum.' Seloy Indians, part of the Timucuan Tribe put together the first meals for the first Thanksgiving in North American soil. Is in here when the first swines run away and populate extensive areas from Louisiana to Texas.

The Huguenots from Fort Caroline decided to face this threat by stepping forward to the impending attack. Laudonnière and his men split their forces and left just less than forty soldiers behind to protect this fortress, near the May river bluff (today's Saint John's river).

Adelantado Menendez subdued the French Fort and eliminated all its inhabitants, except children and women whose lives were spared. Here is what he said to the survivors that were sent to Havana after the massacre:

"You are not guilty for having been born on the protestant belief. I simply cometh obeying my beloved king Philip orders, Henceforth I spare your lives in honor of our God almighty. In the name of the Father, the son and the Holly Ghost... Amen!"

For the good luck of the Spaniards, The Huguenots War ships, four in total, had been shipwrecked by a hurricane. Some 200 survived and landed ashore 40 miles south from today's Saint Augustine. For 10 days, they were living on oyster, fish and fruits like coconuts. They were heading up north to hopefully reach their fort. They were praying for better weather because swampy areas and crocodiles were not too far away. On the night of the 28th, Timucuan indians, who were uninvited witnesses, told Menendez of the marooned Huguenots whereabouts. Around 10p.m. Menendez and his elite convoy, took hold of the Survivors. Some were found on the shores Near Matanzas (massacre). There was one French survivor that could understand Spanish, and was approached by one of Menendez men. His message was simple: "Tell your people to surrender, and we will see if forgiveness can be granted."

The answer was to give Menendez 50 thousand Ducats as ransom money. Menendez got infuriated and thought of it as an insult. The final message was clearer: "You don't need to buy my religion and my honor, and as heretics you should surrender at once. Your people at Fort Caroline were put to death and you don't have any choice whatsoever."

The French had no other way out and surrendered. Menendez being blinded by his beliefs, took 10 prisoners at a time, and behind a sandy dune ordered the killing. One by one, the hopes of these brothers from a different Christendom were put down to the sword . Here are Menendez words when he was committing this despicable slaughtering:

"For my Holly glorious Catholic Church and our Pope in Rome. For my 'Espana la madre patria' you are sent to Satan's Kingdom. Whoever wants to repent and save his life: Speak up!! Otherwise.. shut your eyes and pray to your own saviour. I do not kill French, I get rid of heretic Lutherans."

Most of them were pioneers that sailed to a new world. Called Lutherans by the Pope; they were these sort of stigmatized Jews from that century. This massacre was considered one of the earliest barbaric genocides on Floridian soil, because most of these prisoners were tied handed behind their backs. Around 220 French Huguenots were assassinated this time.

Ribault, who had escaped from the first Massacre ended up at the same inlet 2 weeks later, at present Daytona Beach. He was captured and sentenced as well. 111 French and him, were executed following the same ritual. What seems so horrifying for today's standards, was a common military deed for Sixteen Century America. Historians asserted that the French would've done the same. ﻿

What went around came around

Fort Caroline was rebuilt by the Spanish and Renamed 'Fuerte San Mateo,' but was burnt down to ashes by avenging French forces a few years later: In April 1568, Dominique de Gourgues led a French fleet which attacked, captured and burned the fort. He then slaughtered all his Spanish prisoners in horrible revenge for the 1565 massacre.

Menendez died of a fever right before he joined the Spanish Armada on September 17, 1574.

One of the Chronicle witness, "Francisco Lopez de Mendoza Grajales, 'Chaplain of His Lordship' Saw lights on the Sky on that horrific night. He considered it a 'sign from Heaven,' and thought it was a comet."

We have checked if by chancet was Halleys comet, who already came in 1539. And there is no record of any asteroid that visited our planet. We suspect that this was another Bermuda triangle enigma. 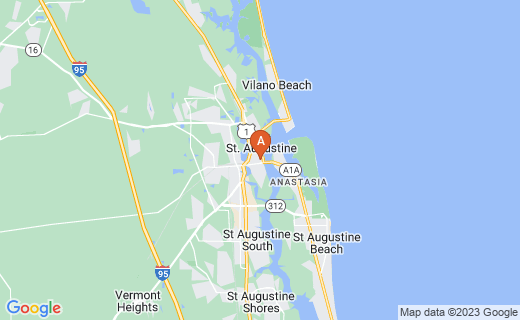