A brave girl in a cruel world. 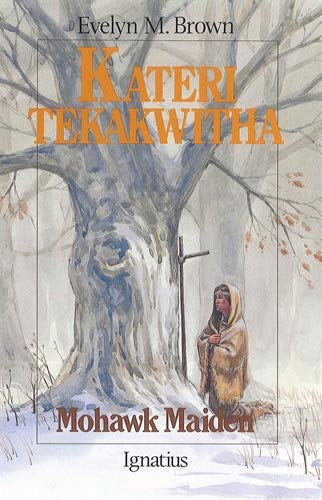 The Lilly of The Mohawks-

In 1656, in the Mohawk Village of Ossernenon near Auriesville N.Y., a young Mohawk was born into the Turtle Clan. Little did anyone know on that day, she was to become the most famous Mohawk, and the first American Indian to be canonized a saint by the Catholic Church. She came down with smallpox, at the age of four, and though she survived with some scarring and partial blindness (especially in the bright sun), her parents and younger brother, did not. Her Uncle, a chief in the Turtle Clan, adopted her and protected her. She needed his protection because though she was born in "the longhouse" she became a Christian/Catholic, and taught other children to love Jesus.

NOTE- In those days the Jesuits were expected to write back to their headquarters, and report of all happenings during their missions. These letters are now in volumes known as the Jesuit Relations. Since she was considered to be blessed and "saintly", very little was written about her in these volumes. She was considered to be too sacred of a person for the priests to write about! They believed that one day she would be a saint.

Right around the same time that she was born, a Jesuit Mission, known as "Sainte Marie (St. Mary) among the Iroquois" was built on Onondaga Lake in Syracuse, N.Y.. One of the priests there, Fr. Fremin, came back to Haudenosuanee (Iroquois) territory to teach his religion to new converts. The most notable of his students was Tekakwitha. She was only 8, but was already a believer and her divinity was considered to be very noticeable at that point. She taught other children, and was known for making wooden crosses and placing them in the forest near her village.When some of the Mohawks scoffed at what Fr. Fremin taught, Kateri, picked up a white Lilly and said, "See this white blossom? I will keep my soul this pure for The Great Master". Fremin was said to have been moved beyond words by this little girl!

Later, the village was burned down and a new one was built five miles from there ( that was customarily done to kill disease and to enable the Mohawks to live off of new land), on the northern bend of the Mohawk River. She lived there, among her people until she was baptized at age 20 by Fr. de Lamberville. Shortly after she was pressured to marry a Mohawk man but refused and considered herself married to Christ. Her Uncle could no longer protect her.

When hostilities arose and her life was in great danger, she was taken to Canada, and lived the rest of her life in the new Christian Indian colony, caring for the sick and the elderly, and teaching her faith.

Today, there is a large shine for her in Auriesville, N.Y. as well as many other towns, and pilgrimages and masses are done still, in her name. Just this week, the Vatican announced the Kateri and Mother Marianne Cope (both from Central New York) will likely receive the papal bull, and will be Canonized next year. Pope John Paul II, beautified both women, Kateri in 1980.

Learn more about her!