Everyone wants to have a house that is pleasant and auspicious to live in and that brings an overall prosperity and good health to all the residents. Vastu is an ancient Indian science that helps you in the planning of such a house. This is my personal observation that people who live in Vastu compliant houses lead better life conditions as compared to those who live in houses that do not comply with Vastu. Vastu principles work on the basis of planetary movements, lordships of directions and the nature of five elements that constitute this whole universe. It also takes into consideration the magnetic forces of the earth, wind directions and local land forms. Here I would explain as to how you can arrange the interiors of your house according to the principles of Vastu and enjoy elevated life conditions.

Vastu for Doors and Windows

All of us need energy to discharge our day to day functions. Have you ever thought where this energy is ultimately coming from? Obviously it this universe only which is the source of all this energy. As per the researches over planetary movements and other aspects of Vastu it is has been worked out that we receive maximum positive energies from the East and North directions. Doors and windows in these directions are good for our health and intellect.

The energies which we receive from North and East directions are most conducive for intellectual functions. It is therefore advisable to keep Audio-visual media like television, computer, laptop, LCD etc. along the Northern or Eastern sides of the rooms.

In order to increase the memory and concentration while using the audio visual media, it is further advisable to keep a pyramid near them. Pyramids are well known to amplify the positive energies and vibrations of a specified zone. 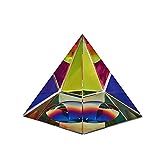 Vastu for Cupboards, Shelves and Almirahs

Refrigerator should be placed in the East or Northwest directions. Refrigerator is a device which combines the properties of both Fire (as it is electricity driven) and Water elements. Meanwhile the outputs of this device are used for eating or drinking.

The chair or sofa should be placed along the Southern or Western sides of the room in a way that while sitting, one should face either North or East direction. This is simply to obtain maximum positive energies and vibrations from the North and East directions. One should avoid sitting with back facing the entrance door. For better stability one should avoid sitting on revolving chairs. While sitting there should be a proper backing or a solid wall behind so that one feels more stable and at the same time the vibrations and energies that are coming from the North and East directions come to a halt.

The Power of Vastu Living: Welcoming Your Soul into Your Home and Workplace
Buy Now

The Southwest corner of a room is the best place for the placement of a bed. Alternately, it can be placed along the South or West sides also. In all cases a bed should be placed in a way that while sleeping, one's head is facing the South direction. There should not be any kind of clutter or storage below the bed and if there is any it will emit negative vibrations to whosoever uses the bed leading to restlessness, insomnia or bad dreams. Shoes should not be kept below the bed. There should be neat and clean space below the bed to ensure emission of positive energies.

So keeping cash chest along the Southern wall ensures the safety and retention of your money because of the impact of Mars and meanwhile it ensures a continuous flow of wealth from the North direction which is the direction lord Kubera, the lord of wealth.

In the bathroom and elsewhere in the house, water taps should be placed along the Northern or Eastern sides.

But in the case of kitchen one should prefer to place water taps along the Northern side only because the Eastern side is most suited for cooking. In case one places water tap also in the East direction then in such a case Fire and Water elements will fall in same line and that will create conflict of energies.

North and East directions are most conducive to the inflow of Water element. Water coming to you from these directions will give you auspicious and positive energy. The best direction for Bathing Shower in a bathroom is the North. It is believed that taking bath with water coming from the North direction, maintains a continuous flow of wealth in the house, however east direction is also good.

North and East directions are most conducive to the inflow of Water element. Water coming to you from these directions will give you auspicious and positive energies. The best direction for Wash Basin is along the Eastern side. The ruling planet of East direction is Sun who is believed to give strong bones and teeth. Cleaning your teeth facing the East is considered auspicious, however North is also good.

Mirrors should be placed along the North or East sides. It means that one should face either North or east direction while using them. In the the bedrooms mirrors should be placed in such a way that they are not readily visible while one is lying on the bed. In case they are visible, then they can lead to restlessness. It is a researched fact that one can not stop one's temptation to look oneself in a mirror whenever confronted with it. Bedroom is a place to take rest and presence of a visible mirror will only draw one's attention time and again unnecessarily leading to restlessness and insomnia.

The energies which we receive from the North and East directions are most conducive for intellectual functions. In order to increase the memory and concentration while using the study table, it is advisable to keep a pyramid on the table. Pyramids are well known to amplify the positive energies and vibrations of a specified zone.

I hope you will consider this information while planning the interiors of your dream home. In case you have any queries, feel free to ask me through the comment box. I wish, you lead a prosperous, healthy and pleasant life.