With the next world cup the South Africa 2010 World Finals only months away.We wonder who could become the next World Cup hero. Here are my top ten World Cup heroes to date.In no particular order.

My memories of Garrincha were revitalised by the latest BBC World cup series,here I realised he was the true king of the dribblers!Then I read his biography by Ruy Castro, and found this really was a fascinating story of triumph and tragedy!

Manuel Francisco dos Santos was born in1933 at Pau Grande , he joined Botafogo in 1953, making his international debut in the 1957 South American Championships. Garrincha's first World Cup was to be in Sweden in1958. If only it was that simple for Mané, because it is quite astonishing that he ever played football at all!

Mane was born with his left leg bent inwards, and his right leg six centimetres shorter and curved outwards. The doctors that examined him told his parents that he would never be able to walk properly.He was of slight build, and with his wonky legs he looked like a little bird. His younger sister nicknamed him Garrincha (Wren). After many trials however, he finally achieved his dream to play football.

Garrincha was explosive on the pitch and wild off it. It is said he lost his virginity to a goat.He was married three times, had many affairs, and had at least 14 children.Divorce Lawyers would make sure Mané never became rich.He was a heavy smoker. Alcohol would dominate his life. Mané also had many car crashes , in one drunken spree he ran over his own father, and in another car accident killed his mother-in-law.His exploits make Gazza look like a saint.

So Garrincha made his debut against Russia in the 1958 World Cup.He flew at the Soviets like a missile drawn to the goal. His first shot smashed the post in the very first minute.Time and again the wingman tormented his helpless markers,and beat them for fun as he continued to shine with his weaving runs and ferocious shot.However Garrincha saved his best display for the final against hosts Sweden.

He, and the impressive Pele ran them ragged,Garrincha had lightning acceleration.His gliding runs and neat crosses set up both of Vava's goals. Pele added two also,as Brazil triumphed 5-2 to win their first World Cup.In fact Brazil never lost a game when Garrincha and Pele played together. Garrincha was named in the "Best Eleven" for the competition.

Garrincha had put on weight before the next World Cup. mainly because of his excessive drinking.He was also banned from the Brazilian team in 1959,after his affair with a girl while on a tour of Sweden.He continued playing football the way he lived his life.Selfish and without a care for any one.This carefree attitude was to cost him dearly, as Botafogo made him sign blank contracts ,and added his salary to it afterwards.

After two games of the 1962 World Cup in Chile,the wounded Pele was out and Mané Garrincha became the heartbeat of the team.Against Spain in the last group game,his elusive play set up Amarildo for the winning goal.In the Quarter final , against England, Garrincha used his full array of talents. He headed the first goal,and his thunderous free kick rebounded out to Vava for the second goal.His long range "banana shot" complete a 3-1 rout.

Semi final opponents,Chile were swept aside, with the rampant Garrincha grabbing two more. Mané was sent off in this game, however he was was allowed to play in the final against Czechoslovakia.Here the weaving wingman orchestrated a 3-1 triumph.Garrincha was voted the player of the tournament with four goals he shared the "golden boot" with four other players.

A Brazilian poet dubbed him theangel with twisted legs. At his peak of form the pitch became a circus ring and the ringmaster had the ball obeying his every command.

In 1963, however, the way down of his career started: in fact, Mané underwent a knee operation because of a car accident,and he was never the same player.He drank more to hide the pain.

The 1966 world cup finals would be his last.He scored a superbly flighted free kick against Bulgaria, and his last ever game was the 3-1 defeat by Hungary,the only game he ever lost wearing the shirt of Brazil in 49 Internationals.In all he made 12 world cup appearances and scored 5 goals.

Soon after Mané married Elza Soares, a famous Brazilian samba singer.He continued playing club football for as long as he could , but his addiction took a grip of him. He even tried to take his own life, after the car he was driving crashed into a lorrry, and killed his mother -in-law.In a deep depression,and after more affairs,his drinking took him in a downward spiral.He died , shattered from alcohol, and penniless on January 20th, 1983 aged 49

The free spirit represented Garrincha on and off the pitch, he played for fun and had his own agenda with the ball at his feet. Some older Brazilians reckon he was their greatest player, certainly their greatest entertainer. The video shows him at his mesmerising best, You could watch it again and again.

Pele admits, he would not have won three world cup medals without Mané Garrincha.

His epitaph reads-Here rests in peace the one who was the Joy of the People – Mané Garrincha.

Estádio Mané Garrincha built in 1974 is the stadium built in honour of Mané. it will be used in 2014 world cup finals in Brazil , but will be renamed the Estádio Nacional de Brasília. 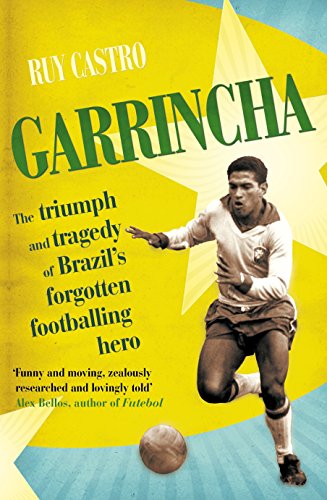