Despite finishing the year with a winning record, the 2014 season was ultimately a disappointment for Kansas City.

Head coach Andy Reid's offense had big problems with personnel. The Chiefs became the first team in 65 years to not have a single touchdown reception by a wide receiver. The offensive line gave up the fourth most sacks in the league with 49. Quarterback Alex Smith is the perfect example of a game manager, throwing 18 touchdowns and only six interceptions. Running back Jamaal Charles was bothered by various injuries all season which hampered his production and quickness but he still managed to rush for over 1,000 yards. Tight end Travis Kelce was the team's leading receiver with 67 catches for 862 yards and five touchdowns.

The defense and special teams kept Kansas City in games. They finished second in the league in points allowed and were the only defense not to allow a 300 yard passer or pass play of 50 yards or more. The defensive line struggled with injuries and illnesses for much of the year. Middle linebacker Derrick Johnson missed the year with a ruptured Achilles and the run defense suffered because of it. Outside linebacker Justin Houston had one of the best pass rushing seasons in league history as he led the league with 22 sacks. Safety Eric Berry was placed on the non football injury list after being diagnosed with Hodgkin's lymphoma in early December and his future with the team and career are a mystery.

The rookie class had mixed performances. Edge rusher Dee Ford saw limited time behind Justin Houston and Tamba Hali and has to get stronger if he wants to start. Running back/wide receiver De' Anthony Thomas showcased his speed on offense and in the return game and should have an expanded role in his second season.

After finishing the year 9-7, head coach Andy Reid and general manager John Dorsey had a lot of challenges to deal with. The team had many free agents that needed to be resigned without going over the salary cap.

On July 24th, cornerback Sean Smith was suspended for three games by the NFL for violating the league's substance-abuse policy.

Kansas City held the 18th overall pick in the draft with many positions to fill. Most notably at wide receiver, offensive lineman, and defensive end.

Other than Dwayne Bowe, the Chiefs had not been good a drafting wide receivers for the past decade. They need to find more pass catchers if this team is ever going to go anywhere.

The offensive line was inconsistent all year. Kansas City has to improve the level of talent on their o-line.

Losing defensive end Mike DeVito in the first game of the year to a ruptured Achilles really hurt the run defense. They need to add more competitive depth to the position.

Kansas City ended up selecting Washington cornerback Marcus Peters with the 18th overall pick. Peters was the best coverage cornerback in the draft but he has a lot of character issues as he was dismissed from the Washington football team following repeated clashes with the coaching staff. The pick was questionable as he team had much more pressing concerns on offense and Andy Reid tends to avoid drafting players with character issues.

The Chiefs also notably selected Georgia middle linebacker Ramik Wilson in the fourth round. Wilson has a strong frame that doesn't hamper his speed and pursuit skills. He was mainly criticized for running around blocks as he struggled to disengage from opposing blockers.

Kansas has to prove that they can stretch the field on the outside.

Alex Smith isn't going to turn the ball over but his ability to perform in the clutch is still in question. Jamaal Charles Has to stay healthy if the team is going to make a statement in the AFC West. Knile Davis is a capable starter, but he doesn't have the same quickness and elusiveness that Charles has. Jeremy Maclin has to make his mark immediately as he is coming off his most productive season. Adding Derek Sherrod and Ben Grubbs to the offensive line adds depth and experience to a shaky and inconsistent front.

Mike DeVito and Derrick Johnson will be back healthy which will drastically improve the run defense. Having Justin Houston, Tamba Hali, and Dee Ford in the linebacker corps will make Kansas City have one of the top sacking defenses in football. The big concern is in the secondary and how soon or if Eric Berry returns to the field.

In all, I think it will come down to Kansas City and San Diego battling for the last wildcard spot.

How will the Chiefs fair this season? 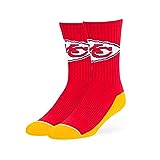