The Wenger Giant Swiss Army Knife in all its Glory

As the proud owner of 3 Swiss Army knives I am firmly on the fan side of this icon of the pocket knife world. Many a time I have got myself out of an awkward situation (or thirsty one!) by turning to my trusty Swiss friend and its many useful implements.

Then recently I found the ultimate, Wenger's Giant Swiss Army Knife and I was amazed. So what is the Wenger Giant Knife and why does it exist... and can you have one?

Here are the answers to all your questions and the good news is, YES you can!

Get Your Own Wenger Swiss Army Giant

Wenger 16999 Swiss Army Knife Giant
With this knife you will make even MacGyver look bad. Every man cave should have one.
Buy Now

New Out of the Box

The Giant was first produced in 2006 and primarily it was a showcase for every attachment that Wenger made for their range of knives. In their 2008 book Guinness certified it as the largest 'pocket' knife in the world. Wenger found it to be the perfect showpiece for their knives and it made its way to retailers who used its size and novelty to attract customers and showcase the extraordinary range of knife attachments available.

Like everything in life, people always want to own the biggest and most gregarious, thus the Wenger Giant became available for the princely sum of $1000US, though if you are now looking to buy one straight from the manufacturer the cost is $2149.50 (as of May 2013). You can get them much cheaper online, but they are still more than $1000.

Weighing in at a massive 1.4kg (3lbs) the practicality of the Giant as a portable knife is somewhat diminished. It is more of a collectors item when purchased by individuals and I would imagine a great conversation starter at your next dinner party or lodge meeting. 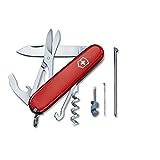 Victorinox Swiss Army Compact Pocket Knife, Red
To me this is the perfect knife for both everyday use and whilst travelling. It features a 2" blade, Scissors, Hook, Bottle and Can opener, Wire stripper, Large and Mini screwdriver, Corkscrew, Ball point pen and Tweezers. Perfect!
Buy Now

The Features of Wenger's Giant Knife

The Giant has 87 separate implements and over 141 different functions, with my 10 favourite implements being:

That's not a knife, THIS is a Wenger Giant knife!

One of my many Swiss Army Knives - Not Quite a Giant!