What to Know Before You Go

Disney's Magic Kingdom is the happiest place on Earth. Chances are pretty good that if you ask any child if there is anywhere they want to go their answer will be the Magic Kingdom. And why not? It is an American icon and is one of the few places where you will literally forget about the rest of the world. Is it the draw of the giant castle at the end of Main St USA, the classic rides that will stand the test of time, or is it being able to meet your favorite characters in person? I like to think it's a combination of all three and then some.

The park itself is modeled after the original Disney park. That's right, its set up to look just like Disneyland. Only bigger, much bigger. Walt Disney World came to be because Walt Disney himself did not like how developed the area around Disneyland had become. It has also been rumored that Walt did not like seeing a cast member dressed like a cowboy walking through Tomorrow Land. Walt set out to by enough land so that his guests could feel like there was nothing beyond the parks and resorts.

The Magic Kingdom is home to classic rides like the Pirates of the Caribbean, Its a Small World, and SpaceMountain. At night the Magic Kingdom is home to one of the most spectacular night shows imaginable: Wishes. Wishes is a fireworks show set to music. Its nearly thirty minutes long. Unless you live in New York or Washington DC it will surely blow your town's fourth of July fireworks out of the water. As if that's not enough Wishes has a warm-up act. Disneyland has the Electrical Light Parade, the Magic Kingdom has Spectromagic. If you thought your child's face lit up when they saw the castle just wait until they see Spectromagic.

The Magic Kingdom may be the second smallest of the parks at Walt Disney World there are still a few things you should keep in mind when you visit. 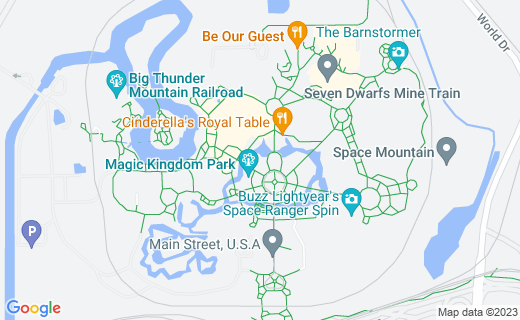 It always amazes me to look at the Disney water ways look from above. Many of them are connected to the larger bodies of water that guests recognize all over the parks.

If you are staying at the resorts and still would like to park at any one of the Disney parks you will receive complimentary parking. Simply keep your resort parking information slip in the front window and you can go right on in.

How Will You Get There?

If you are staying at one of the resorts on Disney property you have several different options to choose from. Each of the Disney resorts has a bus that will run from the resort to each Disney park. Simply hop on and it will take you right up to the park gate. There are also boats that run from the resorts around the Magic Kingdom area to the park. On top of all that the monorail runs right to the park gate. You can take the monorail from one of the three parks around the Seven Seas Lagoon, the Ticket and Transportation Center, or even from EPCOT.

If you are driving to the Magic Kingdom don't worry, there is plenty of parking. Disney runs a tram service so that you don't have to walk through the entire parking lot. From the parking lot you will take the ferry to the park. It drops you off right at the front gate of the park. To get back to your car simple do the process in reverse.

Blisters can be a nightmare when walking from Tomorrow Land to Frontier Land. While Disney does have several first aide stations throughout the parks it is a good idea to keep a small one of your own in your day bag. A nice cushy band aide can do wonders to protect sensitive skin from the horrors of blisters, or one you have a blister to keep it from opening.

What Should You Bring?

I have said it before but since it is that important I will say it again: what you choose to bring or not bring to the parks can make or break your day. Do you really want to have to spend $30 to buy your family rain ponchos twice on your trip just because you didn't pack them in your day bag? Your friends, coworkers, and family might be jealous of your Florida trip but as soon as they see you with a face redder than a lobster you will be at the butt of all their jokes. Why? Because you didn't feel the need to bring sunscreen with you, or if you did you didn't reapply because you didn't bring it with you to the parks.

That being said, what exactly should you bring? That question is a little difficult to answer. The Magic Kingdom is the ultimate stroller park. There will be strollers as far as the eye can see. There will also be hundreds of little girls dressed as their favorite Disney princess. When I first saw this trend I couldn't believe that parents would let their kids wear something that could not possibly be comfortable. After all, wouldn't they be complaining that they were hot and their feet hurt by the afternoon? With that in mind if your child does wish to dress up I would strongly recommend packing a pair of comfortable shoes for them. If you are bringing a stroller it might also be a good idea to bring a change of clothes for your child just in case. In addition to that for young children you might want to consider bringing a snack, bottle of water, and any additional items that you might need for your child's care.

There is only one water ride at the Magic Kingdom: Splash Mountain. Sometimes you get soaked and other times you will hardly get a few sprinkles, its really not enough to merit bringing a change of clothes. Though, many people do ride it in ponchos so that they don't get wet. Thankfully, its likely that you will already have ponchos as a part of your day bag. The only other things you should need to pack are water, over the counter medications (like advil and pepto), and your camera.

Some children get excited at the idea of being able to carry their things, like a big kid. This can be a great opportunity to teach responsibility. Encourage your child to pack only what they absolutely need. Do they really need to bring that stuffed Mickey with them to the parks? No. After all who is going to be carrying that bag when your child is tried and doesn't want to anymore? Pack light, pack only what you need.

What is your favorite ride at the Magic Kingdom?

The Magic Kingdom is full of classic rides. Its a Small World is a must for all Disney first timers. Honestly nearly all of the big name attractions are must dos for the first time Disney visitor. One of the best things about the Magic Kingdom is that all of the rides are child friendly, though some do still have height restrictions for safety reasons.

Fantasy Land is where all of the classic Disney movies come alive. This is where most of the classic rides are located. The Tea Cups, Its a Small World, Peter Pan's flight, and many many others are found here. The best part is Fantasy Land just got a facelift. The one downside to this area is that old kids, the teens and tweens, may not find it too interesting.

Tomorrow Land is probably one of the busiest places in the Magic Kingdom. You can thank SpaceMountain for that. SpaceMountain might be a little much for some of the younger children but that is not all that Tomorrow Land has to offer. Space Ranger Spin, the Laugh Floor, the Tomorrow Land Raceway, and not to mention the Carousel of Progress are great rides and attractions for the family. And even better, they are all inside. This is fantastic because it will offer shelter from the rain, and a way to get out of the heat.

Some of the of the other big name rides are: Big Thunder Mountain Railroad, Pirates of the Caribbean, the Haunted Mansion, and Splash Mountain are just some of most popular rides. They are found in Frontier and Adventure Lands.

One really big tip: most people head straight for Tomorrow Land when the first enter the park. My recommendation is to send one person from your party to get fastpasses for the ride of your choice in Tomorrow Land and then head to Adventure Land and make your way around the park. This way you will avoid the crowds and get to ride more rides and see more attractions.

Its no secret that running from ride to ride all day will make you hungry. So, what is there to eat at the Magic Kingdom? Lots. Main St USA is lined with bakeries, confectionaries, and classic American ballpark food. In addition to that there are tons of quick service restaurants scattered throughout the park. There are also plenty of table service restaurants that have themes right out of classic Disney movies. You can have spaghetti in the same place as Lady and the Tramp. You can enjoy breakfast and dinner with Cinderalla and all of her princess friends. The Magic Kingdom now even serves alcohol at its new Beauty and the Beast inspired restaurant. But, the one thing that you absolutely must try while you are at the Magic Kingdom is Dole Whip. Essentially it is pineapple ice-cream. But, it is so much more than that. If you are walking through Adventure Land and you see an unusually long line at one of the food carts its for Dole Whip. I've heard that the giant turkey legs are amazing, but I myself have never tried one.

The Magic Kingdom has had a love of major renovations over the last couple of years. They have given Fantasyland a facelift and added a whole new castle. You can eat lunch or dinner inside the Beast's castle. The Little Mermaid ride has one of the most detailed holding areas of any ride at the magic Kingdom. You can even walk by the tower Rapunzel was locked away in before she made her way back home.

There are so many things to do. It really is an area for all ages now. And, you can even get wine and beer in the Beauty and the Beast area.

The Tron Lightcycle roller coaster will be the newest attraction at the park. Currently, in 2021, you can see them making progress on the structure of the ride. It looks like it is going to be a higher tier of thrill ride, previously not seen at the Magic Kingdom.