A green LED fishing light can increase your fishing success by attracting bait fish which in turn attracts other fish (hopefully larger ones) that feed on the bait fish.

However, commercial lights may be too expensive for some with limited funds (to include yours truly).

Also, some commercial lights are meant to be operated permanently from a location like a private dock or pier.

So, in the spirit of innovation and "doing more with less", I would like to share how I made a green LED fishing light that cost about $30 (more or less) and is portable!

Here is Part 1 of a four part series of articles that describe how to make a simple Green LED Fishing Light powered by a 9V battery.

Materials and Tools for the LED Circuit

To make the LED Circuit, obtain the material and tools listed in the section below.

Some of the parts you may need to scrounge around, others can be ordered online, or purchased at an electronics store in your area. However, in the case of the LED Diodes, I found them to be cheaper when ordered online.

Note: Do check out the sidebar for pictures of the LED Diode, Resistors, Battery, and Snap Connector. Also, in the Amazon section below, an LED Diode is listed. It is rated at 3.3 - 3.5 fwd voltage but no fwd current is listed. Contact the company for more details and adjust the resistance as needed. 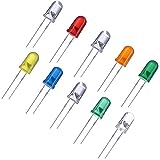 Although it is not required, I strongly suggest assembling the LED circuit using a bread board to make sure the circuit is working properly.

Also, it is much easier to trouble shoot an issue with a component or the circuit's design on a bread board compared to an assembled circuit.

For ease of reference, see the picture in the side bar of the LED Circuit being tested on a bread board.

The circuit design is simple - an array of three LEDs each with a resistor wired in series and the LED/resistors wired in parallel.

For more details, see the circuit design in the picture below.

Once you have an understanding of the circuit design, proceed with installing the components on to the bread board. Remember to connect the power only after all components are in place.

After all components are in place, check the wiring is secure, the components are aligned as the design details, and do look closely for potential shorts like crossed leads and wires that may "fry" an LED.

Finally, connect the power to the bread board. If all LEDs light up, you should be good to proceed to Step 2. If they do not light up (be it one or all), trouble shoot the circuit.

Once all LEDs light up (hopefuly on the first try), proceed to Step 2.

Step 2 - Placement of the LED Diodes

In Step 2, the LED Diodes will be placed on to the spray can cap that you scrounged around for and found hopefully in your pantry, garage, bathroom, etc.

Taking the spray can cap, mark off three equally spaced spots on the cap where you would like to mount the LEDs.

You can be extra meticulous and mark a point every 120 degrees, or you can wing it, so long as there is room between the LEDs and there is space to work with to connect the Resistors, you should be good.

After marking the points, take an LED and place the shorter (negative) lead on to the mark you have already made. Place the LED so the longer (positive) lead is tending to the cap's center. Then, mark the spot. Do this with the other marks you made.

Next, take a needle and poke holes at each point you marked that are just large enough for the LED leads to be pushed through the cap.

Then, take an LED and push the negative and positive leads though the holes. Be sure the longer (positive) lead goes through the hole that is closer to center. Do this for all three LEDs (see the picture in the sidebar for reference).

Once all three LEDs are in place, they should look like the last picture in the sidebar. Select the thumbnail provided. If they do not, fix before proceeding to Step 3.

In Step 3, we will secure the LED Diodes using the hot temp glue and hot glue gun.

To do this, turn on the glue gun and heat the hot temp glue (stick).

When the hot temp glue readily flows through the nozzle, begin forming a layer of glue just below the LEDs and around the leads.Do this for all three LEDs, and then let it cool for a minute before proceeding.

After a minute of cooling, turn the spray cap over and form a layer of glue on each of the legs of the LED leads as well. Do this for all three LEDs, and then let it cool for a minute before proceeding to Step 4.

Finally, cross the positive leads toward the center by bending them inward. This will be critical to soldering later. See the pictures in the sidebar for a better understanding of the details described in this step.

The last step - Step 5, is the easiest. Connect the 9 Volt Battery to the Snap Connector. Do not look directly at the LED, and point it away from anyone.

You should see all LEDs light up. If not, trouble shoot as suggested in the Bread Board Testing section above.

Also, check out the video below of the completed LED Circuit described in this article!

Note: If an on/off switch is desired, it can be added at this point if desired. Also, as an added precaution against the negative wires contacting the positive leads, hot temp glue was applied to the connection points.

Part 2 of the four part series of articles that describe how to make a simple Green LED Fishing Light powered by a 9V battery is posted!

Part 2 details the construction of the Green LED Fishing Light's PVC Body. The body will be waterproof and floats.

Do check it out when you get a chance at "Making a Simple Green LED Fishing Light - Part 2 PVC Body".