How to catch, clean, and cook a Tiger Muskey.

Here is a smaller one.

Here is how I do it.

Welcome fellow fish nuts and cooks. I am here to help you to better understand a fish usually thought of as a sport only fish. Not in my book! 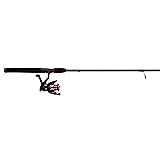 How to catch them in the summer:

The tiger muskie, (esox masquinongy), is a furocious predator that eats mostly large minnows. It is known to take after worms and crayfish on occaision as well. In woodsy areas like rivers, they will attack frogs and small to medium sized birds within their reach, from time to time.

Casting or trolling with spoons is a popular method, but I prefer live bait on a bobber. The minnows should be about 5-7" and I recommend a steel liter and 10 lb test.

Many would say to go to the deeper parts when ice fishing. If you do, I would try jigging a long silver spoon with the front half of a shiner. The head and body will attract attention.

If you want to try a tip up deep, that's fine too.

However, I prefer fishing 6-9 ft. of water with a blue, ice fishing Rapala. Next, I would try jigging a large blue and silver Swedish Pimple with a little bait on it.

Also, this depth is where I prefer using a tip up with a minnow.

How to clean it-

Since this is way too long to fillet, I did it like this:

- Use a knife to scale it completely. Wash the slime off of the underside well.

- Then, starting at the tail, chop it into 3inch steaks ( like a salmon).

-Turn the steak over so the skin is on the side and the meat is facing the ceiling and the counter top.

- Cut the back bone and ribs out, leaving the fillet whole. Take out just the bone, all in one piece.

- Then cut in 1/2, cutting where the spine used to be. (In the middle of the back cut along where the back bone was, length wise on the fish.

Wash very well, and freeze it or refridgerate right away!

How to Cook It-

-Soak it in cold salt water.

-Rinse it well and place into an empty bowl. Add some lemon juice and let it sit until your frying pan or oven is hot.

-While heating the stove/ oiled frying pan, get some Mrs. Dash, one large egg, and garlic salt, ready.

-When the pan is hot, take the fillet out of the lemon juice and cover it with garlic or celery salt. Rub it on good!

-Let it sit for a few minutes and then dip into the beaten egg.

- Then place on a plate and cover it in Original Mrs. Dash!

It is done and AWESOME! I love it, so tell me what you think!

Are they hard to find?

They are sterile but are still plentiful in the North East and all across the Mid- Western U.S.

Note- There are known as the fish of 10,000 casts, because there are a challenge to catch. This is mostly because they do not reproduce, unlike most fresh water fish. Therefore, they do not school, "team feed", or sit on nests or "beds". Instead, they cover large areas alone, looking for prey.

I just caught one in Butternut Creek in Central New York, using live bait. I was casting where I always catch bass, and I wasn't catching a thing. It was strange and I couldn't understand why until I switched to live bait and... boom! My line tightend and I saw a huge flash when I set the hook. I was using either 4 or 6lb test, and no steel liters! I never knew of Tiger Muskies being there, but he was! The top of the food chain was scaring everything else away!

He fought me for over 15 minutes. He couldn't bite the line because I burried the hook in the corner of his lip. I thought he was going to break the line, so I kept opening the bail every time he started to strip the line out. I did that about 20 times, and kept guiding him toward the current, to wear him out. I tried 3 times to grab him behind the head before I could get him onto the bank. That was one of the better fights in my life! My friends say that I am awesome for being able to take him with such minor/simple equipment, and I guess I am. lol

Now the sport fishers can exit! The following won't interest you.

What is your favorite fresh water fish to go after? Please tell me what fish in the comment section, if you choose other!

Other fish and fishing blogs!