Jose Mourinho - The Special One 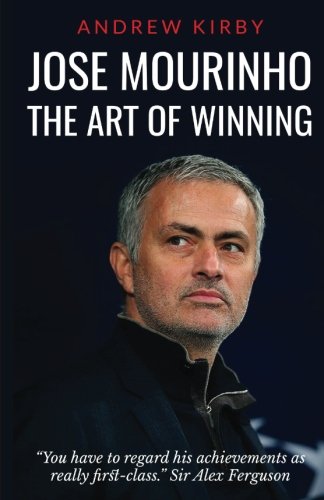 Jose Mourinho: The Art of Winning: What the appointment of 'the Special One' tells us about Manchester United and the Premier League
Buy Now

José Mourinho - The Special One

José Mário dos Santos Félix Mourinho borns in Portugal, Setúbal, January 26, 1963. is a Portuguese football manager. In the United Kingdom is known by the name "The Special One".

He is the son of a former Portuguese goalkeeper Felix Mourinho, who won many titles in his football career.

Mourinho would come to study Physical Education at ISEF (Institute of Physical Education), Technical University of Lisbon, having completed the course with good grades, and as a physical education teacher at a secondary school in Setubal, once again proves his fitness to prepare, organize and manage people.

In the 90th, Mourinho was at Estrela da Amadora (as trainer and then as assistant) and Vitoria de Setubal. In the mid is hired to work with England coach Bobby Robson at Sporting Clube de Portugal. Mourinho won the nickname of translator, and quickly became a translator of the influential technical assistant to Bobby Robson.

Maintain right arm of the English coach when he moves to FC Porto and later to FC Barcelona.

Become an expert on Spanish football and when Robson goes for PSV, Mourinho remains in Catalonia with Dutchman Louis Van Gaal. Confidence and professionalism of Mourinho will widen the range of functions. It has a very active role in training and preparing for games. Becomes assistant coach Van Gaal.

Mourinho at Benfica:
In 2000, there is the opportunity to train a Portuguese team. Is chosen by Sport Lisboa e Benfica to replace Jupp Heynckes after the 4th round of the Portuguese league.

When you start to win over Benfica fans (especially after the victory against fierce rivals Sporting Clube de Portugal 3-0) for elections in Sport Lisboa e Benfica.

Change the presidency of João Vale e Azevedo for Manuel Vilarinho. Mourinho leaves Benfica after 9 games, as the new president had a coach and Mourinho knew he was a "term" in Benfica.

Mourinho at F. C. Porto:
Also during this time, takes over the União de Leiria, where he will remain until January 2002. Earlier this month, is chosen to replace Octavio Machado as coach of FC Porto. He ended the season in third place, achieving a total of 11 wins, 2 draws and 2 losses, having left him for the União de Leiria, the player Derlei. Mourinho promises with unusual certainty the title the following season for FC Porto: "next time we will be champions."

In 2003, Mourinho won the Portuguese first league with 27 wins, 5 draws and 2 defeats, wins the Cup of Portugal (against his former club Uniao Leiria) and winning the UEFA Cup (against Celtic Football Club).

The following year, FC Porto to win once again the Premier League, now with 8-point lead. Lost in the Cup final against Portugal rival Benfica, but 2 weeks later triumphed in the highest proof of the UEFA Champions League of Europe, defeating AS Monaco (3-0). Throughout the proof FC Porto and Chelsea only lost to Real Madrid in the first group stage and then eliminated Manchester United, Olympique Lyonnais and Deportivo La Coruna.

Mourinho at Chelsea:
With such a route was not surprised the envy of many clubs, including Chelsea's Roman Abramovich. In Portugal, some doubted that the success of Mourinho remained beyond its borders. Mourinho returned to surprise came out in disagreement with the manager of FC Porto and moved to the command of the richest club in London, Chelsea. In June 2004, becomes one of the best paid managers in the world earning about 5 million pounds per year.

As he did at FC Porto, Mourinho will not only. Takes with him his assistant Baltemar Brito and Andre Villas, physical fitness coach Rui Faria and a goalkeeper Silvino. The fortunes of the Russian Roman Abramovich helps in hiring Mourinho Tiago Mendes (Benfica), Didier Drogba (Marseille), Arjen Robben and Mateja Kežman (PSV Eindhoven), Ricardo Carvalho and Paulo Ferreira (FC Porto).

In December 2004 he was leader of the English championship. On 27 February 2005, beating Liverpool 3-2 in the League Cup and winning his first trophy as a coach outside of Portugal. Two months later, on April 30, 2005 Mourinho sagra to English champions after beating Bolton 2-0. Chelsea FC had not won the league 50 years ago.

He was a thorn in Chelsea: 3 May 2005 is eliminated from the Champions League by Liverpool in the semi-final after eliminating the quarter-finals of the "giant" FC Barcelona's Ronaldinho. However, renewed his contract with Chelsea FC.

The September 20, 2007 José Mourinho and Chelsea came to mutual agreement for termination of contract. But on September 18 confirming resignation would have been effected. The Russian Roman Abramovich Mourinho changed by the director of football Avram Grant.

Has been elected twice as the best coach in the world.

Its popularity in the London club is such that even today, at Stamford Bridge, home where the London club acts, sees his name chanted in song, is not uncommon to be claimed Mourinho to return to the club.

Mourinho at Inter Milan:
After a few weeks when rumors circulated that he would be coach of Inter Milan, his hiring was made official on June 2, 2008. There were also rumors that he had been harassed by Barcelona, which was confirmed but the negotiations failed.

As usual, José Mourinho brought his technical team ever, the Portuguese Rui Faria, Silvino and Andre Villas Boas. In addition, Giuseppe Baresi, was elected to act as Assistant Manager José Mourinho at Inter. Please note an interesting aspect related to the presentation of the special one at Inter: Mourinho would not say he was special. Before I wanted to underline that those who were truly special was the very Internazionale, pointing to the great relief that history has the club in football history, contrary to his former club. This, for many, was seen as an aside here to Abramovic's Chelsea, which may lead to understand that the London club unfairly devalued the 2 league titles Mourinho won there, when the securities fled the club for nearly 50 years . However, Massimo Moratti believes that Mourinho is very similar to Helenio Herrera, legendary coach of Inter Milan who won the only 2 European Champion Clubs' that the club owns and headmaster of the famous Italian Catenaccio tactics

You can read more about portuguese players here: