Cristiano Ronaldo The Best Fifa Player of The World

Cristiano Ronaldo was born in Funchal (island of Madeira, Portugal), February 5, 1985. He is a Portuguese soccer player, whom José Mourinho was once called "the son of Van Basten".

His name was a tribute of his father to Ronald Reagan. Beside the Football he makes several advertisements for various brands such as Nike, Suzuki, Pepe Jeans and Banco Espirito Santo.

His Career Clubs: His first club was the Andorinha, which quickly attracted the attention of CD Nacional. Later in 1995 joined in the children's CD Nacional. In its first season, the football player began his winning desire, to win the championship of children, thus winning the first title as a football player. With only 11 years old out of the Autonomous Region of Madeira and go to Lisbon, entering in the juvenile Sporting Clube de Portugal. His debut was in September 2002, defending the Sporting, when she was only seventeen years of age. During the 2002/2003 season, Cristiano Ronaldo has acted in 25 matches and scored three goals for Sporting. In the debut game of the new Alvalade XXI stadium of Sporting Clube de Portugal, Cristiano Ronaldo made a game so exciting that the players of Manchester United in the return flight to England, asked to Sir Alex Ferguson being taken to replace David Beckham , who had moved to Real Madrid. Currently playing in Manchester United, the English Premier League team. His contract with the English club was signed in 2003 by 12.24 million pounds sterling, and renewed in April 2007 until the year 2012.

You can read more about other portuguese players here: 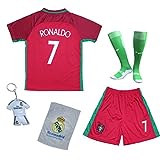