For our first "solo" trip, we went to Cooper's Bayou. I say solo because it was the first time Nick and I were alone when we went out. Gone was the safety of someone on shore or nearby on a boat, ready to help if we got in trouble. We were on our own, and as such I packed a frozen half gallon of water (reused milk jug) and my watertight box where I stowed my keys and cell phone.

Cooper's Bayou is basically grass flats surrounded by the mainland to the west and south and mangrove islands to the east, or bay side, of Pinellas county. I'm not sure where the name Cooper came from - probably someone who lived nearby way back in the day. Bayou in this area is typically the name given to a shallow, protected body of water, not the swamp bayou you think of in Louisiana.

The launch itself is simply beautiful, an opening framed by mangroves that gives one a view of blue waters and the mangrove islands across the bayou. I felt as if I were peering through a window at the world outside the contraints of land.

The weather this day was bright and clear with winds out of the east around 15 mph. If you continue reading Grasshopper's adventures, you'll see this wind thing becomes a common denominator. I chose Cooper's Bayou because it looked relatively protected and with the winds from the east I figured we could paddle upwind while we were fresh and have a tail wind to help us get back to the launch when we were tired.

We set off across the bayou, eager to reach the mangroves on the other side. The tide was high so passage posted no worries. We did, however, encounter lots of wind ripples...and more leaping mullet than I've ever seen. I really expected one to jump into the kayak with us. And they were huge! All around us silvery bodies flung themselves skyward. Once, twice, turn and three times.

As we neared the island the wind became calmer (well, technically, the island blocked it) and we could see more beneath the surface and began to explore the edge of the mangroves. This day would prove to be the day of the mullet and birds, for as we came around a point a blue heron bid us adieu with a flap of it's large wings. I scrambled to get my phone and take a picture but the heron was long gone by the time I even unlatched the watertight box.

We continued paddling, skirting the mangroves as mullet jumped around us. From time to time a large swirl appeared in the water in front of us, likely a trout or redfish spooked by the kayak. I said to Nick at one point, "It's a good thing your dad isn't here." "Why?" "He'd tip us all into the water jumping up after those fish." We laughed about that, especially when Nick said, "Daddy's so silly sometimes," his head shaking as he rolled his eyes and dropped his forehead to his hand.

Around another bend we encountered the blue heron again. I was still too slow to get a picture as he took one look at us and took flight again. After the third time this happened it seemed the bird was leading us on a merry chase to nowhere, but when we rounded the next bed we just stopped cold.

The southern, most protected reaches of the bayou were covered in little brown bodies...ducks, everywhere. They congregated towards the middle of the bayou so we, on the outskirts, didn't bother them. They just floated, as if a hundred duck dummies had been cast on the surface of a lake by duck hunters. And here the mullet didn't jump, the reds didn't swirl. Not that these little ducks could have swallowed them. It was just as if this were protected duck space at this hour.

We crept along the edges of the mangroves, paddling quietly to not disturb the ducks. Further on we discovered a short mangrove trail, a very cool shady place that wound a short distance into the mangroves. We explored, then crept back out. After a couple hours of paddling we headed back. Almost at the park, Nick uttered the magic words, "This is my best day ever!" And that is why we have Grasshopper. 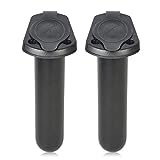