The Spartans Looking Forward to Indianapolis

The 2013 college football season will be very interesting for the Michigan State Spartans. Their schedule is not nearly as bad as last season, as they are playing against mostly average teams. There are three crucial games that the Spartans will have to win in order to make a trip to Indianapolis in the end of the season.
Mark Dantonio`s team is is considered one of the most dangerous teams in the Big Ten as they will have a unique opportunity to be undefeated before the Big Ten Championship game. However before they get there, the Spartans will have to go through Notre Dame, Michigan and Nebraska.
There is no doubt that the Spartans have enough talent to achieve greatness during the 2013 season as they will be looking at Andrew Maxwell (senior) to lead them to as many victories as possible.

The Spartans have a unique chance to get to the BIG Ten Championship game this year as their schedule looks somewhat easier than the other teams in their conference. This season Michigan State needs to have a successful run as the program right now is on the verge of greatness and needs to take the next step into the world of top 10 college football programs in the country.

If the Spartans manage to win their home games, and get what is expected of them on the road, Mark Dantonio's team will be making a much needed trip to Indianapolis (if they make it it will be their second appearance out of three championship games).

Michigan State hosts their instate opponent the Western Michigan Broncos, under the lights in Spartan Stadium. This will be the second time that the Spartans will have a night game to open the season, as last year they played Boise State (ironically called the Broncos too).

This game will not present any problems for the Spartans as they will show dominance and win the game with a wide margin. Playing at night in a sold out Spartan Stadium its not easy as the atmosphere will be electric.

In week two of the regular college football season, the Spartans will be hosting the South Florida Bulls. The Spartans should not have any problems with South Florida, as USF does not present any significant danger to the Spartan team.

USF does not have any weapons that will surprise the Spartan coaching staff which have had over 8 months to prepare for the game. On the other hand the game against South Florida, represents a great opportunity for Andrew Maxwell and the rest of the team to start getting familiar with each other and start building chemistry.

Michigan State will win this battle, even though the weather might be a factor as the game will be played at Noon on September 7, and it might take longer for the Spartans to adjust to the heat.

Without a doubt this game can be considered the easiest game of the season for the Spartans as they are playing Youngstown State at home.

There is no room for surprises here as the Spartans will dominate from start to finish and will win with several touchdowns. This game would be a great opportunity for Dantonio to test some of the more unconventional plays in his playbook, as he might be needing them the following week when Michigan State goes into South Bend to play Notre Dame.

Youngstown State will fight, however the Spartans will come out on top as the difference in the talent is simply astonishing. This will put an end to the Spartans three game home streak as their important games will start with Notre Dame.

The game against Notre Dame will be the first real test for the Spartans in the 2013 season. Both teams always manage to deliver an exciting game no matter what form they are in.
There is no doubt that Notre Dame is the clear favorite here, and this is mainly because the game is played in South Bend, and Notre Dame has slightly more talent than the Spartans.

Even though the Spartans are the underdog, do not count them out as they will fight until the last minute on the clock to try to get a priceless win. If the Spartans win at South Bend, they will be looking to be ranked in the top 8 after four weeks of play. It is highly doubtful however that Sparty will prevail in this Midwest battle, and the general consensus is that Notre Dame will win this one.

Following the loss to the Irish, the Spartans have a scheduled BYE week, which will help them recover and regroup for the upcoming game against Iowa.
The Spartans usually have trouble playing against Iowa as Iowa has beaten them several times, in the past few seasons. The Iowa team, even though ambitious, cannot beat Michigan State, as the Spartans will take this one.

This game will be a very important game for the Spartans because if they loose they will be in a very dangerous situation. If they win they will be back in the game, and this is the most probable scenario as Michigan State beats Iowa in Iowa City

This is another very easy game for Michigan State, as they will face possibly the weakest team in the BIG Ten - Indiana. Indiana has been dismantled by pretty much every team in the BIG Ten for the past few years, as the team is writing shameful pages in the schools football history books.

Michigan State will enter the game as winners of the Iowa duel, and will have already won 4 out of 5 games. This should help them boost their confidence and they should not have any problems with the team from Indiana.
This game can even get ugly if Michigan State gets on the board early, as they will try to make a statement

Michigan State welcomes Purdue to Spartan Stadium, as the Spartans will have to stay focused and win another manageable game.
The Spartans will enter the game with a record of 5-1 which will make things even tougher for Purdue. If Michigan State shows up to the game and plays every play on 100% they will walk away winners of this matchup.

The Spartans will take care of Purdue fairly easily as they will look forward to the difficult part of their schedule.

The Spartans will travel to Campaign IL, to face the tough Illinois team. This game will be the official rehearsal before the big game for Michigan State who plays Michigan the following week.

Illinois will put up a fight as they will be fueled by their faithful fans, however the experience and the coaching abilities of the Spartans are far superior than Illinois which will result in a victory for MSU.

Should be a close game possibly even closer than most people expect it to be.

This is the most important game of the 2013 season for the Spartans. Their most hated rival (Michigan), is coming to East Lansing with not such an impressive team and resume. This will be the perfect opportunity for the Spartans to destroy Michigan and prove that Michigan State is controlling the state in both football and basketball, and it has been that way for the past few years.
The Wolverines however won't go down without a fight, but they are simply not talented enough to beat the Spartans this year. MSU still has unfinished business from last year when Michigan beat them by not even scoring a TD, so the game will be as heated as any college football game.

If the Spartans have a good start to the game they will demolish the Wolverines, therefore a win for the Spartans is very plausible.

More about this rivalry here: Michigan vs Michigan State 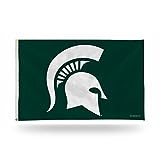 The Michigan State team will be flying high after they beat their arch rivals Michigan, and the game against Nebraska will quickly get them back to earth.

Nebraska will be one of the best teams in the BIG Ten this year and they will play at home which is a huge advantage as their stadium is one of the loudest in the country.
Michigan State will lose the game in Lincoln and that should not be a surprise to anyone, as the Spartans usually have one or two games per season where they completely blow it.

After a devastating loss to the Nebraska team, the Spartans will look to rebound as fast as they can and they will do that against Northwestern.
Michigan State usually never had problem with the Wild Cats, however last season they surprised everyone by playing great football and recording some memorable wins.
During the 2013 season however things will not look as bright for Northwestern as they did last season and they will loose to the Spartans.

This will be the last home game for the Spartans in their successful season. The Spartans will not have any problems overcoming Minnesota and they will win on Senior Day.
This game will have huge implications as there will be a possibility that MSU is trying to get to the BIG Ten Championship game and beating Minnesota is extremely important.

The Spartans will pull trough and win, which would mean that they will most likely make it to Indianapolis.

How Many Games Will Michigan State Win This Season?