The Rock and John Cena

A Match Made in Fantasy

It was just a matter of time before the "people's champion" and the leader of "C-nation" met head to head in the WWE ring. Both The Rock and John Cena have secured a very comfy spot in the WWE hall of fame. They both have collected an amazing fan base. Some might even say one that rivals the glory days of Hulkamania. Now as Wrestlemania lingers just a year away the hopes of a confrontation between these two wrestling icons is floating about making fans excited and pushing revenue out the ceiling for WWE promoters, but how did it get to here?

The Rock had become the most electrifying man in the WWE. His work in the ring and on the mic had lifted him to the top of the WWE roster. He handled the mic with the style and rudeness of Rowdy Roddy Piper. His ring presence was as powerful as Jake the Snake Roberts and his wrestling ability was right up there with Brett Hart. As most people are aware of that is not enough to make it to the top in the WWE. You have to have charisma, and the Rock was full of it.

He took a gimmick that was just ridiculous and turned it into one of the most recognised names on the wrestling circuit today. Rocky Miavia was nothing more than a revamp of the WCW character Prince Iakea, but Rocky would mold and sculpt until he had formed the base of what would soon become the people's champion.

Soon, however wrestling would take a backseat for this third generation superstar as Hollywood came a calling and The Rock answered in full scream. The Rock, now often referred to by his real name, Duane Johnson, would complete film after film, each one grossing just as much as the last. His face lit up Hollywood red carpets and parties and the Rock was now flashing the People's eyebrow on a much bigger screen than he had before. He had become the people's actor.

While the Rock continued to persue a very successful career in the movie industry WWE was left with a gaping void. The Rock was a big part of WWE storylines and matches and without him it seemed the show had lost a good bit of luster.

John Cena was a young upstart who made his major appearances in Ohio Valley Wrestling under the moniker Prototype, a terminator style gimmick. He was a very big deal on the indy wrestling circuit and was known for his hard work and dedication to the craft of wrestling. Cena would hit the WWE universe wide open, with ruthless aggression and a style that was unmatched. I can honestly say I have never witnessed a wrestler amass a fan bas that big as fast as Cena did.

It started to appear that WWE had found a suitable replacement for it's long lost people's champion. Years would pass and The Rock would stockpile film achievements, awards and some of the box offices most successful movies to date. His reputation as a prominent actor would continue to grow but his reputation as a phenomenal wrestler would start to fade. He was being remembered more for the Scorpion King as opposed to the Rock Bottom.

Cena's mic skills were unmatched by any current WWE superstar. He showed the fans that he respected them more than they could ever know and this started to make more and more critics look at him as the new people's champion. Cena even revamped the WWE world title which he has held numerous occasions. While Rock was away playing various roles in the movie world, Cena was dominating WWE universe. He would earn various awards and titles over his career and soon it was evident he was the big player in the wrestling game.

Despite a rocky beginning as a rapping thug Cena forged a name for himself and made his impact a lasting one in the wrestling world. Some critics even credit him for bringing the sport back into the entertainment. With a new people's champion named, it was just a matter of time before the old champion came around to see what was going down!

Now here we stand in 2011 and what may very well be the beginnings of the biggest feud in wrestling history lingers about us wrestling fans like a piece of candy hanging over a fat kids bed. Shawn Micheals and Brett Hart, Hogan and Andre, and even Undertaker and Kane all stand their ground as amazing battles in the halls of wrestling greatness, but Cena and The Rock could surpass them. The match is set for Wrestlemania 28 in Miami on some chosen day in April of 2012. A match a year in the making is just unheard of. WWE will be working overtime to boost this angle and promote what may be the most epic of all Wrestlemania main events to date.

With a war like this going on maybe we should look at our combatents a little closer.

A tale of two icons

Both Cena and the Rock have humble beginnings in the wrestling industry. The Rock started as Rocky Miavia, a high flying third generation superstar who despite having a cheesy gimmick and an even cheesier hair style became the sport's most noted persona. Cena began as the terminator like Prototype, which despite being very silly in nature, made quite the impact in the indy circuit.

Both men are unmatched as far as mic skills go. Who can forget the Rock blasting the character of The Hurricane by calling him the Hambergler, or the ongoing mayo insults Cena tossed at Shamus throughout 2010? These guys are instant classics everytime they touch the mic.

In the ring both men have an amazing arsenal of moves. The Rock has the spinebuster and the Rock bottom, Cena the blue thunder and the attitude adjustment. Both have their silly set up. The Rock with the people's elbow and Cena with his patented five knuckle shuffle. Each man is a wrestling mastermind so they are very equal there.

If they appear to be equal on all grounds than how will this match go?

The fans will decide

I think who ever the fans get behind the most through the 2011 wrestling season will be the man to come out on top in 2012's wrestlmania main event. Cena's C-nation will rise to the occasion for sure but perhaps the disgruntled People the Rock once loved will not view him in the same light after his long term departure from the squared circle. Many of the Rock's fans have become followers of John Cena and his antics and may not be so willing to return to the Rock's good graces.

I noticed on the Monday Night Raw following Wrestlemania that the fans seemed to laugh and cheer more at Cena's insults directed toward the Rock. The Rock had a great amount of fans but it really felt like Cena's were there in larger numbers and louder repitition. One factor could be age. Cena represents the younger WWE fan while the Rock is more in tuned with fans of my generation.

How will the fans go/ I could not say and feel confedent about it. Both wrestlers are top notch performers and maintain a very hardcore fan base. Let's just hope we see this one come to be in 2012 or even better, sooner! 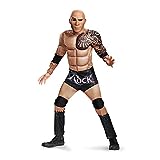