Football fans love watching football games and half the fun is having your favorite beverage and a few snacks during the game. Quite often that beverage is beer and what could be more fun than drinking out of a beer stein with the Logo of your favorite NFC football team!

The following is a collection of beer steins and mugs with the team logos of the NFL teams in the National Football Conference. Matching team drink coasters are also handy to have on hand when you need to set your mug down to have both hands free to cheer and clap for a fantastic play in the game.

The NFC of the NFL

The loyalty of football fans to particular teams is most often related to geographical area. If you live in an area where a certain team plays, you usually root for that team. Many of us also grew up as a fan of a 'hometown area' team, and moved away, only to enjoy following them from a distance. Perhaps your team is represented on this page.

Let's face it, you have to have a slightly recessive gene that has a little something to do with the brain to go out on the football field and beat your head against other human beings on a daily basis. 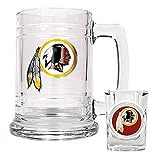 The Washington Redskins have been an American football team for over 81 years and have played more than 1,000 games since 1932. They were known for a year as the Boston Braves, then the Boston Redskins. The "Skins" moved to Washington, DC in 1937 and are the longest established team in the Southern United States.

The New York Giants were one of 5 teams who joined the National Football League in 1925 ~ and they are the only one from that group which still exists today.

The Giants also have another unique fact ~ they share their stadium - Metlife Stadium with the New York Jets! And, although the stadium is located in New Jersey, the team represents the New York metropolitan area. 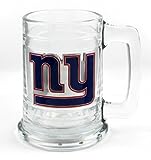 For 53 years, the Dallas Cowboys have been known as America's Team, the Doomsday Defense, The Boys, and the Big D. With 30 playoff appearances and 5 Super Bowl wins, everyone in America knows who the Dallas Cowboy football team is. 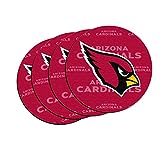 Based on the ages of its teams, the NFC North is the oldest division in the NFL. The four teams have been together in the same division or conference since the Vikings joined the league in 1961.

The Green Bay Packers football team is the third-oldest franchise in the NFL, established 95 years ago in 1919. When Earl Lambeau and his friend and former high school football rival George Whitney Calhoun founded the team, Lambeau solicited funds for uniforms from his employer, the Indian Packing Company. He was given $500 for uniforms and equipment, on the condition that the team be named for its sponsor. The Green Bay Packers have played in their original city longer than any other team in the NFL.

The Vikings, my BFFs favorite team because she's from Minnesota, was an expansion team in 1960. Beginning with the 1961 season they were affiliated with several conferences, but since 2002 they have been part of the NFC North. They have had 4 conference championships and 18 division championships and have made 27 playoff appearances. 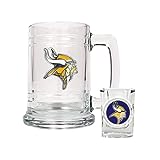 Another football team began in 1919, originally as a company team called the Decatur Staleys. The club was established by the A. E. Staley food starch company of Decatur, Illinois. The company hired George Halas to run the team, and in 1920 it became a charter member of the NFL. After moving the team to Chicago in 1921, now called the Chicago Staleys, Halas purchased the rights to the club from Staley for $100.

Afterwards, Halas renamed the team the "Bears" and the team began playing in Wrigley Field, home to the Chicago 'Cubs'. Today the Chicago Bears play at Soldier Field II in Chicago and have been to the playoffs 25 times and won one Super Bowl (1985).

Beginning as the Portsmouth Spartans in Ohio in 1929 as an independent professional team and joining the NFL in 1930, they eventually realized they couldn't survive in Portsmouth, the (then) NFL's smallest city. The team was purchased and moved to Detroit for the 1934 season where they are now known as the Detroit Lions.

The Detroit Lions are one of my favorite teams to watch ever since a player I'd watched play in college went on to play for the Lions.

Football is a game played with arms, legs and shoulders but mostly from the neck up.

The NFC South Division was created prior to the 2002 NFL season, when the league realigned divisions after expanding to 32 teams. There are currently four members:

The Atlanta Falcons team brought professional football to Atlanta in 1965. They shared Atlanta-Fulton County Stadium with the Atlanta Braves baseball team until moving to the Georgia Dome in 1992. A new Falcons Stadium has been proposed and will likely open in time for the 2017 NFL season. 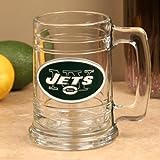 Great American Products NFL Falcons Tankard, Black, One Size
A classically styled glass mug which is perfect for everyday use and becomes extra-special to Falcons Fans with the Atlanta team Logo.
Buy Now

The Carolina Panthers are a fairly new expansion team in the NFC, begun in 1993 and becoming the 29th NFL team. The Panthers play in Charlotte, North Carolina at Bank of America Stadium.

Another 'newer' football team, the New Orleans Saints were established in 1967. The name "Saints" is an allusion to November 1 being All Saints Day in the Catholic faith, New Orleans' large Catholic population, and the spiritual "When the Saints Go Marching In", is strongly associated with New Orleans.

Though barely competitive for the first 20 years, since then the 'Saints' have been to the playoffs 9 times and won the Super Bowl (XLIV) in 2009.

The Tampa Bay Buccaneers became a team in the NFC just 38 years ago (1976) and play in Tampa, Florida. In the 2010 season, they became the first team since the merger to complete a winning season when starting 10 or more rookies. The 'Bucs' were Super Bowl champions in 2002. 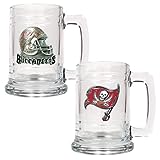 Don't give up at half-time. Concentrate on winning the second half.

After the AFL-NFL Merger in 1970, the division was renamed the NFC West. The 2002 re-alignment changed the entire look of the Division. The NFC West teams now include:

In 1946, the 49ers became the first major league professional sports franchise based in San Francisco and one of the first professional sports teams based on the West Coast. The name "49ers" comes from the name given to the gold prospectors who arrived in Northern California around 1849 during the California Gold Rush. Sometimes known as The Niners, naturally their team colors include Gold! They have been Super Bowl Champions 5 times and play their home games at Levi's Stadium in Santa Clara, California. 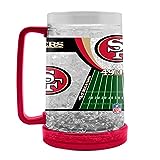 The Seattle Seahawks were established 40 years ago (1974) and have been a part of the NFC since 1976. They are the only NFL Team located in the Pacific Northwest, so draw fans throughout Washington, Oregon, Montana, Idaho, Alaska and Canada.

The Seahawks are the current Super Bowl Champions!

The Rams began in Cleveland 78 years ago (1936). In 1946, they moved to Los Angeles because they no longer wanted to compete with the Cleveland Browns.

In 1995, the Rams moved to St. Louis, Missouri and became the St. Louis Rams. They have won three NFL Championships and are the only NFL team to win championships in three different cities (Cleveland, Los Angeles, and St. Louis).

Established 116 years ago (1898), the Arizona Cardinals are the 'oldest continuously run professional American football club in the United States.'

Beginning as the Chicago Cardinals, the team moved to St. Louis in 1960 and played there until 1987. In 1988 they moved again and were the Phoenix Cardinals through 1993 and now are known as the Arizona Cardinals.

The Cardinals hold a dubious record of having the longest active 'championship drought' with their multiple losing seasons. By 2012, the Cardinals were the first NFL franchise to lose 700 games since becoming a team. At the end of the 2013 season, their record was 511–716–39. 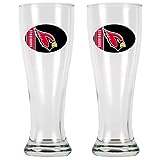 The reason women don't play football is because eleven of them would never wear the same outfit in public.

Which is Your Favorite NFC Football Team? - Mine has always been the Detroit Lions!