A guide to achieving blonde hair

Are you struggling to get your dak hair whether it is coloured or natural to be blonde and you are tired of hearing "wait for it to grow out"?

And is splashing out at the hairdressers not an option?

Well here I will take you through my experience with bleaching kits, toners, dyes and purple shampoos and how one simple product could have saved me a lot of time and money. I made the decision to go back to my natural hair colour (blonde) from black a few months ago and only now after a lot of trial and error have I achieved it.

I began with a bleaching kit. I knew my hair was going to turn out orange, however after bleaching it didn't turn out too bad. It stripped all the black out and took my hair to a sort of light ginger, however it was made to look worse as it was quite patchy. I used L'Oreal super blonde creme prelightener for this which I purchased from boots for around £5.00. I bleached my hair a second time a couple of weeks after and a little more of the ginger came out, but unfortunately I felt like my ideal blonde was still a long way off and I certainly couldn't afford to go to the hairdressers.

I decided to browse the internet and do some research when I came across topics and discussions about toners which apparently lifts out the brassiness on bleached hair. I was quite hopeful that the toner was the answer. I purchased one from boots which I can't remember the name of unfortunately but it stated on the box this was just a temporary colour, I was prepared to try anything. I mixed the toner and I was quite nervous by the deep purple colour, but, I still applied it and followed the timing as stated on the leaflet but as I rinsed it off and waited for my hair to dry it had taken some effect, but nothing to what it said it would. So I wouldn't recommend this product too much.

I then thought about using a hair dye, so again I went out and I was looking at a golden blonde colour, but then I thought that would probably bring out the brassiness even more rather than cover it so instead I went for an ash blonde, I used superdrugs own make dye in medium ash blonde which is around £3.22 which worked quite well, but I did still have a few bits of the brassy tones left.

Then I discovered purple shampoos, I went out and looked around superdrug and boots. I found one shampoo from the Toni and Guy range in a silver bottle called platinum blonde shampoo which states it 'helps to reduce brassy tones' this was around £5.00 - £6.00. I used it every time I washed my hair, it didn't lather up to well, but I still continued using it, until eventually I just wasn't noticing a difference anymore, I was so close to being blonde but I still had these brassy tones which I just wanted to get rid of altogether.

I spoke to my stepsister who has blonde highlights and she told me after having them retouched they tend to be a little brassy for the next couple of days, but she purchases touch of silver shampoo by Schwarzkopf which combats the brassiness, so I decided to buy it but I couldn't find it in any of the major stores like boots so I went to my local pharmacy and found it for £2.00! It comes in a silver box which states it enhances silver tones in grey or white hair and reduces brassy tones in blonde hair. Then on the back of the box it gives you directions of use which recommends you use your normal shampoo beforehand and then apply the touch of silver shampoo after. I find using a different shampoo first helps because the touch of silver lathers up much better. It's a deep purple colour and states to leave it on for 5 minutes, but I left it on for 20 - 30 and when its lathered up it does lose its colour a little. I recommend a good conditioner after because it does make hair quite dry. I left my hair to dry naturally and couldn't believe the results after one use! I then used it again the next day and i reached my colour at last. I'm now planning on using it once a week just to top up and keep the brassiness away. A slight WARNING is if you use it too often your hair does have this silvery/purple sheen on it, so its not recommended for everyday use.

With this product theres no need for you to go through what i did to get your blonde hair. I'd probably say only bleach/prelighten your hair once, maybe twice depending on what you thinks best, but please do leave it a little while between bleaching if you feel you need to do it twice as it is quite damaging to your hair. Then use Schwarzkopf touch of silver, silver reflex shampoo.

I have read reviews from other people about how amazing this product has worked for them and even how there hairdresser has recommended it, but please remember this is just my experience with these products and please do think it through before taking that step because it is easy to go back brunette, but take into account the damage bleaching can do. Thank you for reading and good luck! 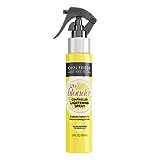