Amazonite Gemstone - Stone of Courage and Protection against Electromagnetic Pollution

Amazonite Gemstone is a semi-opaque beautiful deep blue-green colored stone, often with white streaks, belonging to the feldspar family. This gem is named after the Amazon River though it is quite surprising that no deposits of this stone were so far found there. Some say that they are named after the green Amazon forests and some say the name of this stone is derived from the Amazons, the legendary female warriors. Whatever the case may be it is one of the most beneficial stones to wear or carry. This stone is also often referred to as Amazon Stone. Other names associated with this gemstone are ‘Hope Stone’ and ‘Gamblers Stone’. Amazonite gets its greenish color because of its copper content. This stone is often seen confused with Jade. It has a hardness of 6 to 6.5 on the Mohs scale with a Triclinic Crystal structure. Amazonite is the planetary stone representing Uranus and astrological gemstone of those born under the zodiac sign of Virgo. Apart from jewelry bowls, vases and other fancy items are made with this stone.

This stone is primarily found in India. Other sources of this stone include the US, Austria, Canada, Russia, Brazil, Tanzania, Australia, Italy, Zimbabwe and Namibia. 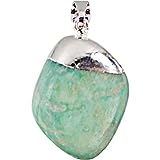 Amazonite Stone is a courage giving stone which helps to balance emotions. Wearing this gem is said to release anxiety, sadness and fear. This stone is also said to inspire confidence, communication, truth, trust, sincerity and clairvoyance. This is a good stone for married couples and those suffering from emotional trauma. This stone is said to give a calming effect to the brain and nervous system and encourages analytical thinking. This stone is also known to absorb microwave, cell phone and computer emanations and protect against electromagnetic pollution. As a healing stone it is used to treat muscular spasms, metabolic deficiencies and blockages in nervous system. This is an extremely good stone to be worn by Office goers as it is said to protect from unfair practice at workplace and from others taking advantage of you. It is also said to attract new business, especially from new customers. It has the reputation of a Gamblers Stone which can be worn as a lucky charm while participating in competitions and games were chances are involved.

Amazonite Stone is associated with the Throat Chakra and amazonite gemstone jewelry is best worn as a pendant or bead necklace in the throat area. Care should be taken when handling Amazonite jewelry as it is sensitive to pressure and can easily crack or chip. It should be protected from chemicals and sharp blows. Avoid using steam and ultrasonic cleaners to clean the jewelry. Avoid using steam and ultrasonic cleaners to clean the jewelry. Clean the stone by dipping the gemstone in lukewarm water with a drop of liquid soap for 5 minutes and then thoroughly cleaning with plain water. Wipe with a soft towel and dry in open air. Store the jewelry in a velvet lined box when not in use to avoid scratches because of other gemstones or metals.