Long, lean, stealthy and dangerous - the snake inspires admiration in some, fear and loathing in others but either way has been a source of human fascination for thousands of years. For reasons which are largely mysterious, the cold-blooded, slithering snake maintains a deep-rooted, symbolic position withing the human psyche.

In Western cultures, snakes have traditionally signalled mistrust. To speak with a 'forked-tongue' s to be duplicitous to 'act like a snake' is to be sly and untrustworthy. In the Garden of Eden, it was the snake-like serpent that whispered evil temptations into Eve's ear, leading to the fall of mankind and expulsion from Paradise.

To the Chinese however, the snake symbolises wisdom, transformation and philosophy and to the Hindu's the snake is a divine being to be worshipped. The snake it seems, is a creature of many memes and meanings...

Freudian Take on the Snake

Sigmond Freud posited that the snake is a symbol of sexual desire and in particular, a phallic representation. In his famous work, The Interpretation of Dreams, Freud suggests that dreams are really 'wish fulfillments' in disguise.That is, while our conscious minds may not reveal the secret desires of our unruly libido, through the symbolism of dreams, we may find the keys to unlocking the secrets of our deepest conflicts and wishes.

Freud singled out snakes as the most important of male sexual representations. As a common dream motif, he believed the snake was most likely an expression of emotional passion/sexual desire. The snake could relate to male energy in general, a particular male or how you experience your own sexuality. 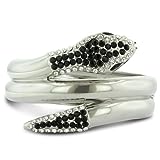 At various times in history, the distinctive designs and cultural icons of ancient Egypt have resurfaced many times as a design trends and even today, their powerful symbolism continues to resonate.. in the 1800s, there was a strong fixation with all thing Egyptian, to the extent that, for those who had the means, it even became desirable to have a real mummy in your drawing room.

In the early 20th century Art Deco designers also looked back to faraway ancient Egypt for inspiration - elaborate, snake-arm bracelets were very popular during this era.

The snake featured highly in Egyptian culture. It was seen as a powerful force and its image appeared frequently in amulets, clothing, paintings and jewelry. The snake Goddess Renenutet was a protectoress who guarded the King, the farmer's harvest and children. Renenutet's son, Nepri became personification of the corn.

The cult of the snake Goddess managed to survive the advent and subsequent rise of Christianity. Renamed Thermuthis by the ancient Greeks, surviving Greco-Roman terracottas depict her as woman with a snakes head.

The Year of the Snake

The wise, 'philosphical' snake is the sixth animal symbol on the ancient Chinese Horoscope. Here the snake represents ambition and wisdom:

The person born in the year of snake is the wisest and most enigmatic of all. He/she can become a philosopher, a theologian, a political lizard or a wily financier. Such person is a thinker who also likes to live well. The snake - person loves books, music, clothes, and fine food; but with all his fondness for the good things of life, his innate elegance gives him a dislike for frivolities and foolish talk.

According to ancient Chinese wisdom, a snake in the house is an omen of good fortune, signifying that the family will not face starvation. In Chinese culture, the snake also has a close association with the dragon, the traditional symbol of the nation. It is believed by many, a large snake, which eventually morphed into a 'dragon', was at the beginning of the many myths, stories and legends that had been passed down through the ages in China.