A simple brooch pinned to a dress, blouse or coat was once a staple look in women's fashion. These days, too many people tend to neglect the brooch as a fashion accessory, yet the right one can really lift an outfit, provide a focal point of interest, a dash of elegance and even be a conversation starter.

As far as brooches go, everyone has their favourite styles and motifs but if the cat look takes your fancy, there are some terrific cat designs for pins and brooches on the market. These were particularly popular in the 1920s and again in the 1950s, although they've ever entirely gone out of vogue. The cat's natural grace and poise makes it an ideal decorative motif. 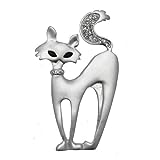 Cat motifs have appeared in various cultures since ancient times - in some cases they were even deified (made into Gods). Ancient Egypt is famous for its cat cult but the cat also pops up in other cultures, including ancient India and the Islamic world.

It wasn't until the superstitious witch craze struck central Europe that cats started to get a bad rap, particularly black ones, as they were associated with witches and even thought to be shape-shifters, ie; witches in disguise.

However the cat's handiness, (able to catch vermin), as well as its ability to be house-trained, meant that it made for a great pet, providing human companionship while keeping pests down. Thus the cat was eventually able to transcend the widespread smear campaign that plagued its reputation for some 300 years.

Gato is Spanish for 'cat' and the kitten design at right is classically 1950s in flavour but with an earlier Art Deco influence as well.

In that era, along with poodles, cats were a common motif and appeared on brooches, cushions, bags, crockery, sweaters and decks of cards.

Stylistically, the cats tended to have large heads, slanted eyes and long, elegant tails that formed an artistic arch. Black cats on bright backgrounds were popular, as were jewelled cat brooches.

The cats were often long and exaggeratedly elongated but in this case the motif is a kitten and is thus shorter and squatter.

No article about cat accessories would be complete without mention of Hello Kitty, the single most successful commercial cat motif in modern history.

There's something about Kitty's sweetly blank, innocent face that resonates with people the world over. She's the eternal kitten - sugar and spice and all things nice.

Hello Kitty was created by Japanese designer, Ikuko Shimizu, in the early 1970s and although the cute kitten was an instant success in Japan, it wasn't until the 1990s that she took off in the West. .

Originally, Kitty's trademark daisy hair accessory was a red bow. You can read about the changes to her appearance in the History of Hello Kitty.

The traditional classic-posed, tabby striped cat is another common cat motif and conjurs up feelings of homey cosiness and warmth. This design is closer to a real cat in representation and is far less less highly stylised than 1950s cats.

The hand enamelled cat at right, made by Daralis, has a gold-plate edging to give it that extra touch of ormolu.