If you're a goth you know the humor in watching those that are hanging out on the fringes attempting to look like they fit in with those that are really on the outside by wearing some type of clothing that they think is goth clothing, but in reality is only their assumptions of what goth clothing is, and not what it really is.

But even so, it does show the influence the goth subculture has had on many people on the outside, and so it is interesting to see how they interpret what it is through what they wear.

As you know, most goths don't mind this as long as the people are real and don't try to infiltrate the goth subculture without knowing in any way what it is.

Even among goths, just like everyone else, there are numerous subgroups and emphasis on various aspects of life, and so no one group could ever describe it.

Yet, if you're really into goth, you know a real goth when you see them, and goth clothing alone doesn't cut it, but especially what people think goth clothing is, yet in reality is far from it. Only those in goth understand this.

Some of the variety among goth is like other cultures or subcultures, for example there are extremes of various degrees which are expressed in very different goth clothing styles.

For example, some are interested in vampires, others deviant sexual practices, and a host of other things that people outside of goth also participate and differ in.

The point is that what a particular form of goth represents does affect the fashion they wear. There's even what some call Christian goth, which is interesting, but very identifiable as goth.

While it's pretty much impossible to define goth or to even find photos of Goth's which show any one type of fashion, Goth fashion and Goth clothing does have some similar traits that are worn more than others, and so can be usually be identified by outsiders.

As Goths like to say about themselves, "I want to be left alone but I want to be seen. I want to see the shock on other peoples' faces."

With most real Goths living that out, goth clothing of course follows suit.

Obviously one facet of Goth clothing is black, although even there there are many more colors worn than it would appear, although it usually will keep some of the darkness and black as part of the mixture.

Also, a couple other things predominate in Goth fashion is the trench coat, corset, and in many cases certain types of shoes or boots.

These, more than anything, are what most people think of when thinking about Goth clothing and fashion. 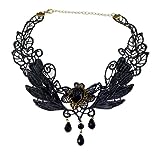 Goth grew out of the punk movement of the 1970s, and the clothing at that time was worn in an effort to break with what was considered mainstream ways of viewing the world and its values. Of course the music also reflected that, but that's another story.

Most of the Gothic clothing in the punk years focused on leather, fishnet stockings, lace and many piercings. Most of you can remember the funky hair styles as well, which usually included being crimped and combed back.

While much of that still remains, the change has been in that it has gone far beyond that alone. Now Goths are concerned not with the statement alone, but in some cases that clothing fits good, just like all people do; although comfort isn't the focus of all, as wearing heavy black clothing in hot weather by some is considered a major statement of unwillingness to conform.

As mentioned earlier, Gothic clothing can't be defined in any way, just like the evolution of Goth can no longer be defined because it is no longer confined to its roots in the punk culture. Again, now it's however you want to interpret yourself as a Goth, or those you hang with as well.

Another big part of clothing yourself as a Goth or Gothic fashion is the makeup, which is indulged in by men as well as women.

Hair color as well is a major part of the Goth look, and it has broadened to include not only the foundational black most of us are used to, but now you can see Goth's hair colored in pinks, blues, purples, whites, reds, and many other colors across the spectrum.

Gothic makeup is a big part of the entire Goth look, and so there are tons of places on the Internet you can find out how to apply Gothic eyeshadow, liner and to give you that ultra-Gothic look.

Both men and women pursue this in many different ways. Like everything else with Goth, it isn't the purpose to copy and one type of makeup strategy, but to understand the basics so you can create your own, unique, individual look.

Putting Goth Fashion and Clothing All Together

So they add the Goth clothing and wrap fashion around it through the color and style of their hair, makeup choices, jewelry and other accessories (umbrellas are a big one), and sometimes with piercings, if an individual is into that.

Anyway, there are as many different ways to dress Goth as there are Goths, and it's very interesting to see them express themselves in these unique ways.