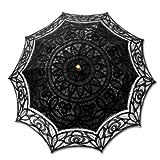 In the Gothic lifestyle there is a propensity to show they'll stick to their beliefs and practices even in difficult situations, including continuing to wear dark colors and heavier material, even in hot weather.

That lends itself to including an umbrella as part of their wardrobe, adding a good looking accessory to their fashion ensemble.

Gothic umbrellas tend to gravitate toward black as a color, although the design, such as lace, along with differences in the top of the umbrella and the bottom, can vary significantly.

There are exceptions, with some color added to the black to complement it, or a completely different color, although that's more rare.

Another great thing I like about Gothic umbrellas is they generate some very good photos, which are included below to inspire and enjoy.

Here is an example of how photogenic a simple Gothic umbrella can be. It's great to see the umbrella being held up to the sky in the midst of the trees and sky as a background. The light breaking slightly through the middle of the umbrella, with the edge remaining dark is a cool look.

What a fantastic photo this is of the Gothic woman walking with the umbrella. Note the completely different look of the umbrella, especially the pointed tips. The play of the shadow on the ground with the some coming from behind her looks fantastic, as it uses the light sand as a canvass.

Here again we see the terrific prop a Gothic umbrella is, as this woman shows with the castle as a background. It's great how the narrow shaft of light against the grass and cobblestone walk is used to accentuate the Gothic woman. Nice!

Even though black is the predominate color of Gothic umbrellas, they are by no means uniform in their looks. As you can see from the photos below, they are designed completely different, with most of that being in the lace, design on the top or underneath, and the edging of the umbrella.

That of course excludes the obvious addition of color to the black, which is almost always included at least as one of the colors when there's more than one.

Notice the first umbrella below. See the Gothic arches underneath. Great look.

This is easily by favorite photo of a scene including a Gothic umbrella. The perfect symmetry of the woman as she walks, the beautiful umbrella, the raven on the pedestal to her left, and the great way that touch of color via the red roses stands out in an otherwise dark image, is amazing. Walking into that mist in the background also look very cool.

I don't know why, but these images of the back of the people from the back holding the Gothic umbrellas are the best. The sense of being on a journey, heading into uncertainty seems to be the appeal. Either way, they're fantastic images.

The one below is also compelling, including the way the Gothic woman is holding onto her dress on the left side as she walks. At first I didn't see her arm and thought it looked weird. But once you identify her arm, it looks great.

With this photo of a Gothic group walking with umbrellas, it's interesting to see the different umbrellas in that setting, as well as the different styles of clothing.

It's amazing to me to see how an accessory like an umbrella can generate some compelling and unique images. Even in the midst of the predominate black color there is amazingly unique designs and feel to the photos. Fantastic.