Celebrity perfumes are always in demand and easily can attract people’s attention. These Perfumes enable the stars to remain in the mind of people even after years. The fans of these celebrities too like the idea of using a product launched or used by the celebrities. Following the footsteps of Hollywood Celebrities, many Indian Celebrities too have their own perfumes. Though I really wonder if many of these celebrities even use the products they endorse, these products never fail to get the attention of people. Indian Celebrities like Amitabh Bachchan, Shahrukh Khan, Shilpa Shetty Kundra, M S Dhoni, Zeenath Aman and Lata Mangeshkar have endorsed perfumes and I am sure that we would see many more in the coming years. 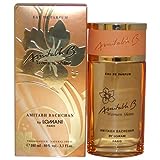 The first Indian Celebrity to have a Perfume Brand is the pretty old actress Zeenat Aman. The perfume named Zeenat was launched by French perfume brand Jeanne Arthes. Shah Rukh Khan launched 'SRK' in 1998 with the same company. Following him, a Sandalwood based perfume ‘Lata Eau De Parfum’ by Gandh Sugand was launched in 2000 after the legendary Singer Lata Mangeshkar. When Shah Rukh Khan has a Perfume, how can Amitabh Bachchan stay behind? Bachchan's perfume ‘Amitabh B' was introduced to the markets by the French Perfume Brand Lomani in 2002. Another Shah Rukh Khan Perfume 'Tiger Eyes by SRK' was launched in 2005 and are available in men and women versions. While the Tiger Eyes for men is a spicy-fruity fragrance, Tiger Eyes Pour Femme is a floral fragrance. In 2007, Shilpa Shetty launched the fragrance S2 (read as S squared where S2 stands for her initials (S.S). According to perfume creator Mark Earnshaw, the scent will have jasmine and musk but also have a fruity scent to it as well, to pay homage to her Indian heritage and appeal to the European market. What is also noteworthy is that the S2 perfume reached Number 3 in the UK Fragrance Chart within 2 weeks of its launch. Though Amitabh Bachchan has talked about the second perfume that he was to launch in his blog in January 2009, I am not sure if it has hit the market so far.

The first Indian sportsperson to bring out his signature perfume is Mahendra Singh Dhoni, the current Captain of the Indian Cricket Team. He released his perfume line in an event held at Dubai in January 2013. The perfume line is named after his lucky number 7. To quote him, "I was born on the 7th of July in 1981, my jersey number is seven, and thus number seven is very special for me. I love the number 7". Dhoni has released six different fragrances for men namely Intense, Power, Action, Connect, Cool and Energy.

Are Celebrity Endorsed Perfumes Worth Your Money?

If asked whether the celebrity endorsed perfumes are worth the money, the answer would be that it depends on the end user. What may be liked or suitable for one person may not be liked by the other person. Some drawbacks of celebrity perfumes are that they are normally highly priced and not available in majority of the local stores. Because of the non availability it is mostly difficult to smell the fragrances before opting to buy it. Though the celebrities have the moral responsibility to make the perfume a success for the manufacturer and at the same time give a good quality perfume for fans we would not know till we buy perfume what is the main motivation of the celebrity. Is it making money for the manufacturer and themselves or is it giving a satisfactory product to the fan both worth in quality and money. However, my advice is to those going for Celebrity endorsed perfumes is to do your own research before buying. It is not important what a particular celebrity says about the perfume, what is more important is what you feel about the perfume. If a certain perfume suits you and you like it, you may go ahead and buy it. However, I have to admit that the Indian Celebrity Perfumes are good enough to be worn.

I am not much a fan of celebrity endorsed products because I think they do it more for money. Remember what happened to the celebrity who endorsed the fake Doctor Munir Khan product body revival? However, I have no problem in recommending Shilpa Shetty Yoga DVD and Bipasha Basu Workout DVD to fitness freaks. But it is yet to be seen if Sachin Tendulkers Sach Toothpaste would reflect his image and is equally good as he is. However, talking on the subject of Indian celebrity perfumes they are quite good but still do not have the popularity and fame of Hollywood Stars endorsed perfumes. Anyway, If you want to bring the favorite stars like Amitabh Bachchan, Shah Rukh Khan or Shilpa Shetty, you can bring home their fragrance. That way if you want a star all over yourself, just sprinkle his or her perfume on you.