Iolite is a bluish purple color gemstone. The name Iolite is derived from the Greek words “ios” meaning violet and “lithos” meaning stone. The chemical composition of iolite is magnesium aluminium silicate. Iolite is a variety of the mineral Cordierite which was named after French geologist P L A Cordier. The other names associated with this stone are Dichroite (meaning two colored rock)and Water Sapphire (as a cube cut from natural iolite rough shows a color clear as water from one end). It is also referred to as Kakaneeli in some places in India because of its blue color. One can see three different color shades in the same stone of Iolite as a result of its Pleochroic properties just like that of Tanzanite Gemstone when viewed from different directions. Since both the stones look alike, Iolite stone is often mistaken as Tanzanite and vice versa. Iolite is more durable and yet available at a cheaper price as it is not a scarce gemstone. It also has a close resemblance with Blue Sapphire. Iolite gem is also referred to as the ‘Gemstone of Vikings’ as it was used in the past by Viking explorers as a navigational aid to navigate safely on their legendary sea journeys because of its pleochroism. Iolite is quite a hard gemstone and has a hardness of 7 to 7.5 on the Mohs scale which makes it a suitable stone for gemstone jewelry. However, it needs to be cut by an expert gem cutter as it should be cut exactly from the right direction to look its best because of pleochroism. It is mostly cut in oval shape. This gemstone is associated with Planet Saturn. 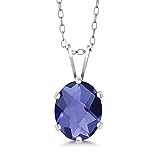 Iolite Stone is said to stimulate the third eye Chakra leading to clairvoyance. Iolite gemstone helps to open the light pathway from throat Chakra up through crown and thereby helps in achieving higher awareness and knowledge. It is a good stone for Psychic Healing and Meditation. This stone is said to enhance leadership ability, inner strength and self confidence. Iolite is also said to bring harmony in relationships. Iolite is helpful in fighting addictions and alcoholism just like Amethyst. Iolite also supports the healing of the eyes, detoxification, stimulates memory and helps with sleep imbalances. This gem helps maintain healthy cholesterol levels, fight against malaria and other chronic infections. This stone is also useful in treating migraine headaches, sore throat, skin disorders and sleep disorders like insomnia.

Great care should be taken while handling this stone. It should be protected from blows to avoid chipping or scratching. It should not be used in ultrasonic cleaner. The stone also should not be exposed to harmful chemicals and heat. This gem can be cleaned using lukewarm water and a solution of mild dish soap using a soft brush. When not in use iolite jewelry can be stored in a fabric lined jewelry box separately.