Tanzanite Gemstone is a bluish purple colored stone which is a variety of the mineral Zoisite. This gem was first called Blue Zoisite but was renamed as Tanzanite based on the place it was first found as per the suggestion by the reputed New York jewelry company Tiffany & Co. This stone displays the property of Pleochroism (like the similar colored Iolite Gemstone, also known as Water Sapphire) which means one can notice different color shades in the same stone depending on the angle the stone is viewed from. This is an extremely popular and highly prized stone because of its rarity and unique color. This stone is also referred to as the "Gemstone of the 20th Century" and is much more a prized possession than Diamond. Tanzanites are normally heat treated to get its unique color as they are normally seen in a dull green or brown color when mined. These Gemstones consists of calcium aluminum silicate and has a hardness of of 6.5 to 7 on the Mohs scale with an Orthorhombic Crystal structure.

Tanzanite Gemstones are rare and was first found in the year 1967 in the Meralani Hills of Northern Tanzania near the city of Arusha. . This gem also became popular as a result of the marketing efforts of Tiffany as a collector’s item. This gemstone is the Birthstone for those born in the month of December along with Zircon and Turquoise. It is also the Wedding Anniversary Gemstone associated with the 24th year of marriage.

The world's largest faceted tanzanite is said to be 737.81 carats. Another famous Tanzanite is the 242 carets Queen of Kilimanjaro set in a White Gold Tiara along with 913 Diamonds (14 carets total) and 803 Tsavorite Garnet Gemstones (32 carets in total). This stunning Tiara is at present displayed at the Gallery of Gold and Gems at the Royal Ontario Museum in Toronto, Canada.

Other than Tanzania, this Stone is also found in small quantities in places like Italy, Sweden, Pakistan, South Africa, Kenya, Norway and Austria. 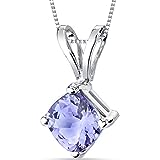 Tanzanite is a high vibration stone which promotes communication and spirituality. It is associated with the third eye, crown and throat chakras and activates the base to crown chakras. When you start exploring your Psychic powers, your psychic impressions may overwhelm you at the beginning. Wearing a tanzanite Stone can help you face the situation. It is an excellent stone for meditation. This stone can assist in Clairvoyance and in connecting with spirit guides and the deceased. It is also helpful in treating throat problems, headaches and communication difficulties.

A wearer of the Tanzanite gemstones exudes confidence and individuality. Women love to wear this gem set on jewelry be it rings, necklace, earrings, pendant or bracelet. After all it is a rare gem and who would not want to possess something as precious and prized as a Tanzanite? Therefore extreme care must be taken when handling or setting this stone as it is not a very hard gem by nature. It should be kept away from acids and high temperatures. Avoid cleaning them in ultrasonic cleaners as it can cause damage to the stone. Store it separately in velvet lined Jewelry Box to avoid scratches.