Peridot is an olive green color gemstone which is the Traditional Birthstone for those born in the Month of August. Romans nicknamed this beautiful gem as the 'Evening Emerald' because of its close resemblance to Emerald, the stone representing Planet Mercury. Peridot is a variety of Olivine and is also referred to as ‘Chrysolite’. The beauty of this stones may be why this stone is also referred to as summer stone and springtime stone. Some say that the name of this stone is derived from the Greek word 'peridona', which means 'giving richness' but some say it might have received its name from the fresh word ‘Peritot’ which means unclear. Peridot is a form of iron magnesium silicate. The intensity of the color of this gem depends on the amount of iron content in the stone.

Peridot is a substitute stone for Emerald and can be worn as an Astrological Remedy in place of emerald. Peridot gem is also highly suitable for those born under zodiac signs Libra, Pisces, Gemini, Leo, Virgo and Capricorn. This stone is representation of Planet Mercury and Venus. It is also the anniversary gem associated with the 16thwedding Anniversary. This gem is associated with solar plexus, navel and heart chakra. Peridot Deposits are found in many parts of the world including Australia, Brazil, China, Myanmar, Egypt, Pakistan, Norway and the United States. The Kashmir region of Pakistan is known for rich quality Peridots. These Peridots are called ‘Kashmir Peridots’. 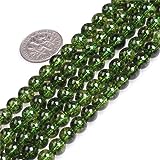 Mystical and Healing Powers of Peridot

In ancient times Pirates used to wear Peridot to protect them from danger and evil. Historical evidence has it that Napoleon gifted his sweet heart this stone as a symbol of his undying love and admiration. This stone is worn by Catholic Bishops signifying purity and morality. There is also reference of this gem in the Holy Bible. The Emerald in most Royal Treasures was in fact Peridots. It is said that many of Cleopatra’s emeralds were also Peridots. However, Emerald is not the only gem Peridots have been confused with. It is also confused with other green colored gemstones like Green Zircon, Green Tourmaline, Green Garnets and Apatite to name a few.

Wearing Peridot Jewelry is said to bring abundance and prosperity. This is a good stone to be worn for attracting love and increasing harmony in relationships. This stone is said to enhance patience, happiness, sleep, confidence and mental clarity. Peridot has healing powers and is used for treating stress, depression, anger, epilepsy and jealousy. It is also used for diseases of the gall bladder and liver. This gemstone is said to increase strength and physical vitality and protect against nervousness and for dealing with hurt feelings. It is believed that this stone has mystical powers and can help dreams become a reality. In ancient times, it was said that a dream about this stone foretold a dangerous situation.

Though Peridot gemstones are widely used in jewelry, they should be handled with great care as it can scratch easily. They only have a hardness rating of 6.5 to 7 on the Mohs scale. Also avoid exposure to heat, harsh chemicals and ultrasonic cleaners.