Who was Chuck Taylor?

The Converse Rubber Corp. was started in 1908, by Marquis Converse. Originally the company was in the business of making rubber work shoes and galoshes. The bulk of their business was seasonal, so the company decided to make products that could be sold all year long. That is how they got into the athletic shoe business.
As basketball became a more and more popular sport, Converse saw an opportunity to make a sneaker that would provide comfort while playing basketball.

In 1917, the first version of the basketball footwear was produced. Originally, it came in natural brown with black trim. All black canvas and leather were developed in the 1920’s. They were the first sneakers to be mass produced in all of North America. It had a thick sole made of rubber, and a high top canvas or leather, that covered the ankles. In the beginning, sales were very slow.

They became increasingly popular once Chuck Taylor’s name went on the sneakers. Charles (Chuck) H. Taylor, was a basketball player for the Akron Firestones. He saw the potential of the sneaker for basketball. He had such a passion for the sneaker, in 1921, he joined the sales force of Converse. Later he became a player/coach for the Converse All Stars, which was the company’s industrial league basketball team. Chuck travelled all over the U.S., promoting the Converse basketball sneaker. He was an expert marketer and a superior salesman.

He also helped to make improvements to the design of the sneaker. In 1932, they put his name on an ankle patch on the basketball sneaker and called it the Chuck Taylor All Star Sneaker. For decades, he travelled coast to coast, with loads of sneakers in the trunk of his cadillac, selling athletics and coaches Chuck Taylor All Stars.

The Official Sneaker of the U.S. Armed Forces

In 1935, Chuck Taylor designs the 1st stitchless leather basketball sneaker, it is the more modern day sneaker, we know of today. This improvement gave the wearer more bounce.

For the 1936 Olympics, Converse made the sneaker in white canvas. Basketball is played for the very 1st time in the Olympics. The United States team won the gold medal, beating Canada 19-8, wearing Chuck Taylor All Star Sneakers.

After the exposure with the Olympics, basketball teams and boys across America were wearing the Converse sneaker with Chuck Taylor’s name on it.

During WW II, Chuck served in the Air Force as a captain, and also coached the regional basketball teams. He was looked upon as a morale booster for the troops. All Star Sneakers became the official sneaker of the U.S. Armed Forces.

After WWII, basketball became a professional sport. Chuck Taylor All Stars were in the right place at the right time. They became the shoe for all players of basketball, from the boys on the street shooting hoops, to the high school, college and professional player of the sport. The black and white style were introduced in 1949.

With the merger of TheBasketball Association of America and the National League in 1949, becoming the NBA, nearly all professional basketball players play the game wearing Chuck Taylor All Star sneakers.

In 1957, the company came out with a low cut sneaker and it became popular as another option to the high tops.

In 1966, Converse dominated the sneaker industry, with an 80% share in the market. In 1968, Chuck Taylor was inducted into the Basketball Hall of Fame, but a year later, he died from a heart attack. 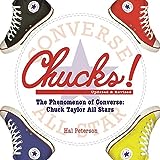 The Nike Corporation started to take over, and many rival sneaker companies introduced new shoes, new colors, and more innovations.

They stopped production in the U.S and Canada and had them manufactured in Asia. As the brand was reborn, went from the 16th biggest footwear company to the 7th largest. In 2003, Nike purchased Converse for $305 million.

Chuck Taylor All Star Sneakers continues to be the most successful shoe in history. You can read about the History of Sneakers, to learn more about how sneakers came to be invented.

Did you ever own a pair of Converse All Star Sneakers