Spinel Gemstone is a favorite stone with gem dealers and collectors because of its hardness, brilliance and wide range of colors. The word spinel is said to have come from either the Latin word ‘spina’ the meaning of which is ‘thorn’ or the Greek word 'spinther' which means ‘sparkling’. Pure natural spinals are colorless and very rare. Spinels often have impurities which give it a wide range of colors out of which red is the most popular. Spinel is found in a wide range of colors like red, pink, violet, purple, green, yellow, orange, brown, black, lavender, mauve, greenish blue and blue depending on the presence of various impurities present in the stone. Spinel is known by different names depending on their colors like Ruby Spinel (red), Cobalt Spinel (blue), Pleonast(black), Picotite(brown), Rubicelle (yellow to orange), Balas Ruby (pink to pale red), Almandine Spinel (violet), Gahnite (blue), Gahnospinel (dark green), Hercynite (black) etc. There is also the Star Spinel which is highly valued and rare. These stones are quite tough with a hardness of 8 on the Mohs scale with a cubic crystal structure and can be maintained with minimum care. All colors of this stone are used in fashion jewelry and is most often faceted in oval, round or cushion shapes. These stone look marvelous on pendants, rings and necklaces. This stone I associated with the Planet Pluto. 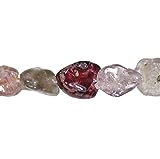 For centuries red spinal was mistaken as Ruby Gemstone and gained a lot of undeserved fame. Perhaps the most famous spinel is the Black Prince's Ruby, a magnificent 170-carat red spinel that currently adorns the Imperial State Crown in the British Crown Jewels. Another famous spinel is the Queen Elizabeth owned 352 carets Timur Ruby which in actuality is a red spinal. Similarly the rubies said to be owned by Tamerlane, Henry VIII of England and Peter the Great of Russia are indeed spinels. The largest known spinel gemstone in the world is part of the Iranian Crown Jewels and is called the Samarian Spinel weighing 500 carats which has a hole in it. As per the legend this stone is believed to be adorned in the neck of the golden calf mentioned in the Bible which was made by the Israelis for worshiping while Moses was receiving the Ten Commandments.

Spinels that are found in the market are mostly untreated since they are almost always completely devoid of flaws and completely clean. However, some Spinels are heat treated to enhance the color of the natural gem to a deeper hue. Spinels are thought to protect it owner from all harm and helps to reconcile differences and to soothe away sadness. The red spinel gemstones especially is said to promote physical vitality and to stimulate strength.

Spinel can be cleaned with mild dish soap. Use a soft toothbrush to scrub behind the stone where dust can collect.