What would Oprah buy? Celebrity shoppers of Amazon revealed.

Oprah, Clooney and Brad - What would they buy?

Ever wondered what it would be like to be able to buy absolutely anything on Amazon? I have. What if you were Oprah Winfrey? What would does she put on the credit card when she's browsing through the virtual shelves of Amazon? What about George Clooney. The super-cool film star can't be caught dawdling in shops so he must use Amazon to pick up things on a whim. You may be surprised to learn he collects tin toys. What about Brad Pitt? If he wasn't a movie star he'd be something else altogether different. Let's see what would be on his shopping list.

When you're a billionaire you can pretty much purchase anything Amazon has to sell. So let's be Oprah for a minute and take a look at our wish list:

George is a Greek and he once had the hair to prove it. Now he keeps it short and maintains an equally sharp image. He's Clark Gable for the 21st Century. 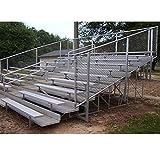 Athletic Connection VIP Series Bleachers (10 Rows - 140 Seat - 21 ft. - Fence)
Well, it's the weekend and amazingly you haven't got a love scene to be in or an Oscar winning film to direct. So why not catch a ball game? What's that? You don't have you're own bleachers parked in your own field? Well get that fixed pronto, Clooney!
Buy Now

Not many people know this but Brad would rather be a landscape designer. That's not saying he doesn't love acting, but his real passion is in situating bushes and fountains. He and Angelina have constructed some impressive examples of his true calling.  Angelina reportedly gave him a 200 year old olive tree which he planted at their french chateau which also boasts 20 fountains, aqueducts and a stream that runs through tunnels and into a moat.

So, what's left to buy for this millionaire gardener who also has a job as an actor? 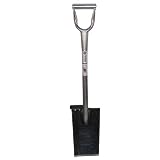 King of Spades KSS13
You don't make a spade and call a spade the king of spades unless it's a great spade. So, Brad, get this spade in spades for all your gardens in Berlin, LA and France.
Buy Now

Thanks for joining in this flight of fancy things on Amazon. Even if you're not George, Brad or Oprah, please leave a comment. I'd love to know what celebrities you'd like to shop for.