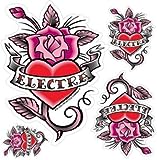 Bicycles, other than our knees and feet, are one of the first forms of transportation we use, and for many people that fascination has never left them, prompting them to get a tattoo with the bicycle or some of its parts as the center of the design.

There are those who choose to have the bicycle itself as the main subject matter, while others include it as part of an overall scene, with many of them being personal and humorous.

As to the parts side of it, the wheels are the element chosen to use in creative ways, with anywhere to a rugged wheel ripping flesh to a woman gliding along on them as a ballerina.

This reminds me of how differently we can all view life and various aspects of life, each of us having a certain outlook or interpretation of people, things and events, which in the case of tattoos, is creatively applied to the skin in unique and compelling designs.

With this first tattoo we'll take a look at a realistic portrayal of a bicycle on its own. In most tattoo themes this is how it works, you go from the basics of the subject matter into all sorts of creative offshoots. It's the same with bicycles as well.

In that case you want to look at the tattoo design from the point of view of quality for what it is, as that can be less important with more creative designs which are attempting to convey humor or make some sort of statement.

So with the bicycle below, from an outlook of quality for what it is, it's nicely done. The lines are clean and the details are all displayed in a complete manner.

My only little quibble with it is it would have looked better with some spokes included in a subtle way.

I'm saying all these things to see how one should think when deciding on having your body permanently inked. It's a big decision and we need to carefully think it through before committing to a final design.

I have no idea what this is all about. This is a funny and enjoyable tattoo, but it does make me wonder what the inspiration behind it is, other than the thought of seeing a buffalo riding a bike would be a cool image.

If you have an idea, let the rest of us know in the comments section.

The little thing I like about this tattoo is the little bright area left on the side of the head of the buffalo depicting its horns. Little things like that can make a big difference with a tattoo design, and that tiny thing makes it a little more interesting than a completely black image.

This tattoo reminds me of when I was in school and had to take a picture and carve out the design in wood and press it in ink and then on paper to recreate the photo.

I really like the quality of this tattoo and the way the boy is riding his bike with no hands, something so many of us practiced at that age. The shadowing of the boy is great, and you can see the sun source hitting him in a way that is very believable. Very cool.

This is a cute and creative tattoo of a ballerina flowing with bicycle wheels as her feet. Including the spokes in the wheel gives us a look at what it could look like with other designs, as few of the bicycles include them. A couple others are much better done, which we'll see below.

This image is more of a caricature, not meant to be detailed in a quality way, but rather to be celebratory as reflected in the ballerina raising her hands as she glides along.

Here's a guy that takes his bicycle very seriously. What it is is a fixed gear ripping the flesh or skin.

The shape and detail of the gear itself is good, as is the way the skin protrudes where the gear is existing. It's not my type of tattoo choice, but it is fascinating to see what it is about a bicycle that is attractive to people.

Talk about a unique and odd tattoo design. I've written about and seen dandelion seed tattoo designs before, but this is one of the more unusual of that genre, and of most others I've looked at too.

Not only is it cool to see the old time bicycle, but the dandelion head man is quite a surprise. Having a cane in his hand is another humorous element to the scenario, and the actual dandelion seeds are done very well.. But this is another image I don't understand as to its significance, if there is any. It definitely attracts the attention of the viewer.

Now to the design of the bicycle. This is an example of how I think spokes on a bicycle should be portrayed, especially on the front, large wheel. For whatever reason it fits in well with the preposterous scene.

Finally we have this hilarious scene from Edward Gorey's "The Epileptic Bicycle." It's so funny seeing the elderly couple having the time of their lives while zooming carelessly down the street.

Everything about the quality and design of the cartoon tattoo is terrific, and the emotion and zest of the moment is captured perfectly in the postures and faces of the man and woman.

One little detail easy to miss but which adds a lot to the feel of the scene is that little black line at the bottom of the front wheel of the bike, giving a sense of fast movement. Those are that types of little things that can make the difference between an average and a great tattoo.

You never know what you'll find when looking for inspiration for a tattoo, and with bicycles it runs the gamut from the realistic to the hilarious, and a little bit of everything in between.

There are the whimsical, serious, outrageous, and clueless results that come from this gallery of bicycle tattoos. In other words, there is just about something for everybody to generate some interesting ideas if a tattoo with a bicycle design is something that moves and inspires you.