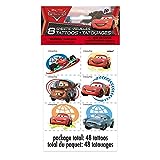 Cars and Trucks are a compelling choice for those seeking tattoos, as people tend to hive off into a favorite brand and stick with them for a long time; it becomes a part of their lives.

That's the case with Ford vehicles, which include the Ford logo, and a variety of trucks and cars.

Probably the most popular choice in the Ford tattoo design world is older model vehicles, which appear to outnumber the rest of the choices by far.

Fans of a car or truck brand tend to focus on what made the company a household name in the first place, which of course is the famous cars of the past, which were many times showcased in a favorite movie, making them even more popular and glamorized.

But fans of the Thunderbird, Mustang and Mercury won't be disappointed in some of the cool tattoos representing those vehicles.

What better way to start off our look at Ford tattoos than the word Ford with a cool font. The letter "F" is especially nice looking, and the addition of that red line complementing the dark colors makes it a great tattoo for a Ford lover.

The Ford Mustang is an extremely popular car of Ford aficionados, and the logo is one admired and desired by those fans. You can see why with this very cool Ford Mustang tattoo. While a high quality tattoo, it was just finished and will show even better after time. The silver and black contrast on the horse looks fantastic.

Here is the same Ford Mustang logo, but with a very different design. While a little difficult to see, the colors to blend in nicely, making it a good choice. I don't like it as much as the one above, but still not bad.

Too bad she placed it in the small of her back. That has gone out of favor since that area has been labeled as a "tramp stamp."

Ford Mustang Tattoo on Woman's Back

This is a humorous tattoo of the old five-window Ford Coupe. The designer seems to have given it a muscle car look with those giant back wheels. Oh yeah, how about that driver! Pretty funny.

Here's another old Ford car, a 1949 Mercury, one of the favorites of Ford fans. It's pretty cool how the choice was made to have the grill of the car being the focus, instead of the usual side view you get with vehicles. Fantastic view.

Considering quality and design, this is by favorite Ford tattoo of the group shown here. It has everything I like, including the dark color, lines and shadow. The way it looks all shined up with that cool short bed works really nice. That short bed was more of a challenge than most would know, and the tattoo artist did it very well. Really great tattoo.

Finally we have the wildly popular tattoo version of the Ford Thunderbird. Those great headlights and slightly turned front tire are terrific.

My only negative concerning the tattoo is both headlights should have been included in the tattoo. That would have made it much better, and more realistic. I understand they're blocked because of the way they're inset, but the car could have been slightly turned to accommodate for that. Still, it's great to see Ford Thunderbird ink.

Seeing these Ford vehicles and logos was very cool. It brings back memories many of us have had, and the way the company eventually had to respond by changing its decision long ago to offer their products in only the color black.