Wear A Thor's Hammer Pendant For Luck And Protection

Wearing a Thor's Hammer pendant is a little like wearing a Celtic Knot ring. It's a beautiful piece of jewelry but it's also so much more.

Generally a Thor's Hammer pendant is in the shape of a short, thick, three-pronged hammer, but sometimes you'll also see it look more like an arrowhead or even a crucifix. Because it depicts a hammer, a Thor's Hammer pendant isn't usually a delicate piece of jewelry. Instead, it makes a bold statement and you'll find a lot of these pendants made from pewter or bronze.

It's a popular pendant worn for luck or protection. But that's like saying people wear a tiny cross or crucifix for protection.That's only the tip of the iceberg.

That only explains the reason they wear it. It doesn't tell you how the Thor's Hammer pendant earned that reputation. There's so much more to the story and it all goes back to Norse Mythology and the God Thor. 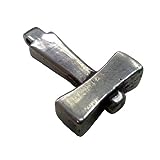 The Story Of Thor's Hammer

Thor was the Norse God of Thunder and War. It's said that his hammer was created by two brothers who were dwarves and their claim to fame was that they made precious items and tools for the Gods.

Thor's Hammer was made of iron which made it very heavy, and it had a short handle which means he could only use one hand to control it. Because it was so heavy Thor had to wear a special belt to give him more energy and iron gloves so he could lift the hammer.

It's said that Thor's Hammer had special magical powers. When thrown, no matter how far, it would always find it's way back to Thor. No matter how poor his aim the hammer always struck it's mark and each strike was always deadly. And when he wanted it to, the hammer would shrink down to a size small enough to be carried in his pocket.

In Norse mythology, the giant Prymr stole Thor's Hammer and demanded that the goddess Freyja marry him in exchange for its return. Thor donned a blond wig and dressed up like the goddess to fool the giant. At the banquet to announce his upcoming nuptials the giant became suspicious because Thor, posing as Freyja, had such a massive appetite. Thor put it off as pre-wedding jitters and the giant was satisfied.

Later that evening the giant placed Thor's Hammer in the 'goddess's' lap as a gift. Thor grabbed up his Hammer and killed the giant, smashing in his head with one blow of his mighty hammer. 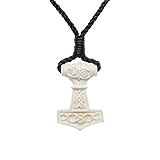 What A Thor's Hammer Pendant Symbolizes

A Thor's Hammer pendant means different things to different people. Some wear it for protection or luck. Some wear it to ward off the Evil Eye and keep away those entities who steal spirits.

The Vikings wore the pendant to symbolize Thor's warrior qualities.

Over time it evolved to be a symbol against the invading armies of Christianity and, as the religious movement progressed artisans started melding the Christian Cross into the Thor's Hammer design. In some cases you'll also see it blended with a wolf, a dragon or other powerful beast. 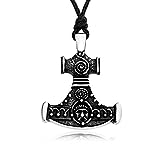