When it comes to waterproof cameras, Nikon is a name I trust. For decades, the Nikonos camera was the preferred camera for professional underwater photographers. But as digital cameras started pushing film into obsolescence and production on the Nikonos underwater camera was halted, Nikon left the door wide open for others to take control of the underwater digital camera market. And they did. Pentax, Panasonic, Olympus, Canon, Sony and others jumped into the game. Fortunately, Nikon is now back in the business of manufacturing waterproof cameras. They haven't created one yet that can go as deep as the Nikonos, but they do now have two rugged cameras geared to average users who want a waterproof camera for the pool, beach, lake or other places likely to destroy a regular compact camera. I own both of the Nikon waterproof cameras. Here's what I like and dislike about each. 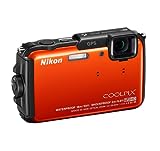 The Nikon AW100 was Nikon's first compact waterproof digital camera and the company's first underwater camera since it stopped producing the 35mm film Nikonos camera. The new AW110 is the next generation of the AW camera line.

The AW100 was extremely popular, and the AW110 is likely to be even more so. Nikon kept all the features that made the AW100 so popular and then made it even better.

The new camera is waterproof to 59 feet (compared to 33 feet for the earlier model), shockproof to drops from 6.6 feet (an improvement from the previous rating of 5 feet), freezeproof to 14 degrees Fahrenheit and dustproof, as well. It's equipped with a 16 MP CMOS sensor, a 5z zoom Nikkor ED glass lens and the ability to shoot full 1080p HD video. So you can capture great quality photos and video both above and below water.

The camera also includes GPS and a compass, so you can add location information and points of Interest such as landmarks to your photos. And once you capture the perfect photo, you can upload and share it from anywhere with a hotspot, as it's equipped with built-in WiFi.

For shooting great photos, the Nikon AW110 offers a variety of scene modes, from an easy auto mode and the typical portrait and landscape modes, to special modes for fireworks, snow, sunsets, night landscapes, backlighting and others, as well as a special setting for underwater to help eliminate the bluish cast often seen in underwater photos. It also features a panorama mode.

What I particularly like about this camera design is the battery/memory card door. One of the most important features in any waterproof camera is the door because it keeps the internal components (which are not waterproof) dry, and I like the locking mechanism on this camera better than any of the other underwater cameras I've tested. You have to push a button and turn a knob at the same time to open the door on the AW110, and you can hear an audible click when the door is latched properly.

If you're determined to buy a Nikon and are more concerned about the quality of photos than the ability to add "fun" effects like borders and fish-eye effect, there's no doubt the AW110 is the best underwater camera for you.

The Nikon S31 is a cute little 10 MP waterproof camera aimed at budget-conscious shoppers. Available in bright pink, blue or white, it's designed to appeal to everyone from kids to moms, and Nikon is marketing it as a camera for everyone in the family.

It's designed with large, raised buttons that are easy to read and push. The on/off button is very clearly marked with large white text, and they've placed the still image shutter button and the HD video recording button on opposite sides of the camera top. I really like this design, as it makes it harder for kids (and adults, too!) to accidentally press one button when you want the other.

In addition to the easy-to-use buttons, the Nikon S31 is designed to appeal to kids with its variety of special effects. The camera includes the built-in ability to add digital borders, create a fish-eye effect, turn points of light into starbursts, add a soft filter effect, create albums and do other fun things. My kids and I had fun playing with these effects, but I think the appeal for most adults will be short-lived, particularly for the digital frames.

The feature most likely to appeal to parents with this camera is its ability to withstand a rough and tumble life with kids. I'm always terrified when my 5-year-old grabs my Canon DSLR, but I don't have to worry with the Nikon S31. It's shockproof to 2.6 feet and waterproof to 10 feet, so I let my daughter use it in the pool and around the house, and I don't have to hold my breath and worry about it breaking if she accidentally drops it. That's a nice feeling!