I know virtually nothing about Photography

Just to be clear, this review of best bridge cameras is not for idiots, I'm sure the typical Hubpages visitor has above average intelligence. No, this review has been written by a photography idiot. When my daughter told me she wanted to buy a "bridge camera", I had never heard of a bridge camera.

We did some research, but to be honest our final decision on which bridge camera to buy was heavily influenced by its...color! I don't mean its ability to capture color, I mean the actual color of the camera. Having said that, all the photographs on this page were taken using my daughter's camera. They are not perfect or by any means professional but they are a whole lot better than I could have taken using an ordinary digital camera.

So What Is A Bridge Camera?

Based on my extensive research (about 5 minutes on Google) a bridge camera is perfectly named as it's a half-way house between a normal compact digital camera and a DSLR (Digital Single Lens Reflex) camera.

The different features of compact, bridge and DSLR cameras are explained in the table below.

Disclaimer: As I have made clear I know very little about photography. The pictures shown here are some of my first attempts. I know that they could be much improved but I know that they are a lot better than I could have achieved with a compact camera.

This first photo is of a Black Headed Gull (Winter plumage). It was taken in good light using full 21x optical zoom. I would never have been able to get such a clear shot using a compact camera.

The next photo is of the same Gull but this time as it is stepping through a shallow pool. This was also taken with 21x optical zoom. With this photo, I believe the sun had just gone behind the clouds so its possibly a little under exposed. I like the elegance of the Gull and the colors, reflections and ripples in the water. One thing to bear in mind is that a camera will never match the performance of a good pair of binoculars so don't expect the images you capture of distant objects to be as clear as when you view them through binoculars.

Next is a photo of a blackbird (very common bird in the UK) that I took through my study window. He was a few yards away so I had to use the 21x optical zoom. I was pleased with result, the photo is quite clear (despite the window and the magnification) and captured the character of this brave but wary bird.

The bright red rose-hip against the snow was one of the first photos that I took using my daughter's new camera. It was quite early and the sun made the rose-hip color stand out. I just snapped it on auto-mode. I like the contrast of green, white and bright red.

Finally I took a few photos of our dog, Barney, a Border Terrier. I was so pleased with the result that I've used it as my avatar here on hubpages and elsewhere.

My photos so far have been ok but I know I will improve as I get used to the camera and all its settings.

I'm not sure how long my daughter will let me keep borrowing her camera. I guess I'll have to find my own camera. I'm tempted to just get the same camera (Nikon Coolpix L120) but in black. Here are some of our more recent best bridge camera photos.

I thought I would be post some photographs I took after I had a little more experience. Again, all these photos were taken with my daughter's red Nikon Coolpix L120.

The first photo is of a river scene with a fine Mute Swan in the middle. This was taken as the sun was beginning to set and I think shows how the Nikon captures subtle colors and light.

The next photo is of one of the most common flowers (some might call it a weed), the daisy. Although it's quite a small flower, this photo (taken using the "macro" setting) shows how macro shots can reveal nature's beauty.

This photo of a camera shows a Grey Squirrel. He (or she?) seems to be saying "put'em up". I had to use the zoom function but the squirrel was quite a good subject he seemed to be as interested in me as I was in him.

This Great Crested Grebe was not close and the light was poor (you can see the rain hitting the lake) but the zoom managed to capture the essence of this attractive bird.

Finally, a little later, a pair of Great Crested Grebes paddled past me, again the light was poor, but I like this photo because of the way it shows the reflections in the dark water.

How to Choose the Best Bridge Camera

I really like my daughter's bridge camera but I think I should get one of my own. But how to choose? How do you make a bridge camera comparison? If you Google "bridge cameras reviews" you get hundreds of links and the choice is overwhelming. I addition you know that the best bridge cameras of 2011 are likely to seem obsolete in a few months time.

Having shopped around a little, I've narrowed my choice down to four. There's the Nikon Coolpix L120 (like my daughter- but I think black would be more appropriate for me). Then I've looked at three other top brands; Fujifilm, Canon and Panasonic. 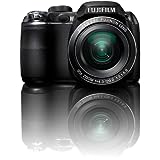 I'm a keen birdwatcher, I've been impressed with the results that I got with the Nikon Coolpix L120 but ideally I'd like to have more powerful telephoto capability. I am tempted by the Fujifilm Finepix S4000 14 MP. It has up to 30x zoom and according to the reviews its picture quality is excellent. In my opinion this makes it good value at less than $250. 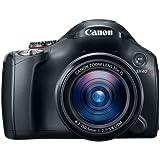 I know that lots of experts swear by Canon cameras so I thought I had better check them out. The one I would like is the Canon SX40 HS 12.1MP Digital Camera with 35xoptical zoom. However this might be outside my price range at just short of $400. The reviews I've read have been very favorable, people have been particularly impressed by the zoom, performance in low light, video and general picture quality. At the moment this is my dream camera. I'm tempted to either start saving or I could just wait until it drops $100 or so!

How Do Rate Your Bridge Camera?

How Do You Rate Your Camera Against Your Initial Expectations?