Introduction to the DSi XL

The DSi XL is the latest DS console in Nintendo's handheld video games console franchise. While it is going to cost a little more than the current DSi, it doesn't actually do much more, which seems a little strange in today's micro culture.

The main selling points of the DSi XL are it's increased screen size, increased stylus size and some pre-installed games. This doesn't really seem a huge deal, and if you already own a Nintendo DSi or a DS Lite, it probably is not worth investing in a DSi XL.  While the start to this DSi XL review may seem a little pessimistic, I do actually quite like the new DSi XL.

The larger screen does make the DSi XL much more approachable, allowing you to play games with ease, and read eBooks without having to strain your eyes quite so much.

The enlarged screen of the DSI XL really does do a huge amount to increase your gameplay satisfaction.  Especially when combined with the larger, more comfortable stylus

I mentioned in teh introduction that despite the increased size, the DSi XL features are practically identical to the basic DSi.  However tehre are some changes to the DSi XL Features.

The DSi Xl is expected to be a little more expensive than the DSi, however you can currently get a pre-order discount on the DSi XL on Amazon, So if you are looking for a cheap DSi XL console, check out the links below! 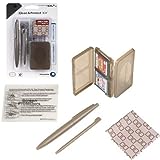