Getting A Kindle Reader Shipped to The UK

Strictly speaking, this Hub is now out of date. I'm leaving it up as it's an accurate description of my experience when I originally got my Kindle shipped.

However, things have changed now - if you want a Kindle delivered to the UK then all you have to do is visit Amazon's UK Kindle store - you'll even get a Kindle with a three pin plug on the charger!

The UK Kindle store currently has 400,000 Kindle books to choose from - plus another 1.8 million out of copyright books that you can download for free!

Amazon now ship both their Kindle 2.0 and Kindle DX e-book readers to over 100 different countries worldwide. However, for the moment at least, all sales are made through the main Amazon USA website and the devices are shipped from the States. This might change in future, but at the moment there's no hint from Amazon as to when this might happen.

This isn't a big problem, but you will need to pay for your Kindle with a credit card. Like many Brits, I much prefer to use a debit card for my day to day purchases. Even so, it was a relatively minor inconvenience and, in my opinion at least, well worth it in order to get my hands on a Kindle.

I opted for the Kindle 2.0. I toyed with the idea of a DX - I would certainly have liked the nice big screen - but one of the reasons I wanted a Kindle in the first place is because I travel a lot on business. I thought that the Kindle 2.0, being smaller overall, would be better for lugging around with me. It's a personal decision at the end of the day. Even if you opt for the DX it's still a lot better than carrying a whole bag of books around with you.

The Amazon Kindle - At Amazon (Where Else?) 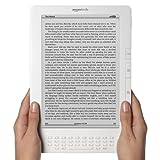 Shipping The Kindle To The UK

I must confess, I did have some concerns about having an item shipped from the States to the UK. The delivery time was a possible issue and there was the matter of import taxes to think about. These vary from country to country depending upon local rules and regulations.

Actually purchasing the device was pretty straight forward. For the UK at least, there is no import duty to be paid. You do need to pay VAT - now back at 17.5% unfortunately - and international shipping. I also bought a leather cover to protect my device and the grand total was about £240. Obviously this will vary depending upon the exchange rate in effect at the time when you make your purchase.

As far as shipping time goes, I was pleasantly surprised that it took only six days from placement of order to delivery. Two of those were over a weekend, so hats off to Amazon for that I think.

Unsurprisingly perhaps, the Kindle ships with a charger which is equipped with a U.S. style plug. That wasn't a big problem for me as I have plenty of travel adapters around the house. If you don't have one, you can disconnect the American style plug from the end and you'll be left with a USB connector which you can then use to charge your Kindle from a computer. you can also find plenty of UK Kindle chargers on the Amazon UK website now - along with a whole host of other Kindle accessories - covers, lights, screen protectors etc.

My only other concern was the suitability of the wireless connection. I live in Edinburgh, in a part of the city which has sometimes patchy reception for mobile phones. However, when I fired up the Kindle it worked just fine - no problem at all. I was downloading Kindle books from the Amazon store in a matter of minutes after my new toy was out off the box.

On the subject of downloads, most of the Kindle reviews that I have read to date say that it takes just under a minute to download a Kindle book. I was pleasantly surprised to find that, at least for the books that I was buying, it took way under a minute. There was only one - which was Dante's Inferno complete with numerous illustrations - which came anywhere near to the sixty second mark.

Not all of the Kindle's U.S. functionality has been provided in the international version. The web browser is non-existent for example. That doesn't bother me too much - I just want to read and buy books on it. However, it might be an issue for you.

You may also find that some of the Kindle books on display at the Amazon Kindle store are not available for download in the UK. Presumably for copyright reasons. Up to now, this hasn't been a problem for me. I presume that this will improve over time as e-book readers in general become more popular and widely used.

Newspapers are available from a number of different countries. There are, at the time of writing, five UK daily newspapers to choose from - The Times, The Independent, The Daily Mail, The Daily Telegraph and The Financial Times (UK Edition). Cost is around $22.99 a month and you can have a free fourteen day trial to see if you want to continue your subscription or not. Again, you would imagine that the number of titles available will increase in time.

Over the piece, I am absolutely delighted both with my new Kindle reader and the ease of having it shipped to the UK.