Isn’t it great to have an iPad? Yeah, sure is. Why, you can browse the internet, watch movies, listen to music, write an essay-oh, hang on. Nope…it’s not so good for that, having to use the onscreen keyboard. But wait! The solution is easy! You just buy yourself an external keyboard-even one that doubles up as a nice case-and you’re good to go! So, shiny new keyboard in place, you sit down to craft your masterpiece, and-oh, hang on. If, like me, your work tends to have so many typos that it looks like it was written during an earthquake, you’ll notice straightaway that something is missing.

Nope, the problem isn’t with your keyboard; it’s with your iPad. So far, despite Apple’s assurances the OS6 would bring ‘autocorrect for every keyboard’, it’s still failed to materialise, even after the update to OS6.1, with only silence coming from Apple when questioned about it. So it doesn’t look like it’s coming built in anytime soon.

Well, don’t worry, because-if you’re prepared to put up with having to make a tiny, tiny tweak to enable your work to be opened in Microsoft Word-I’ve found a solution. And it’s all thanks to discovering a word processor app called UX Write.

Now, it’s not mega cheap at $14.99 US/£10.49 UK, but if you’re someone that loves the idea of being able to do word processing on your iPad (AND have your documents be able to open in Word, and saveable as .doc files) then this is the way to go. Personally, I write at home on my desktop in Word, then save my work into my Dropbox cloud. Then, if I want to write when I’m out and about, I simply open up UX Write (it has Dropbox integrated into it) and carry on with my work. Simple (or email it to yourself if you don’t want to use Dropbox for some reason.) Plus, the autocorrect feature is actually BETTER on UX Write as it highlights any words it’s autocorrected, and if you decide you don’t like what it’s done then you can tap it to be given the options ‘revert’ (to what you originally typed) or tap for more autocorrect options. So that’s all your problems solved! And all you have to do to make it all Word compatible (and to be saveable as a .doc file) is perform a one-click fix; it DOES involve saving your work in HTML format (STOP!! DON’T PANIC! I SAID IT’S A ONE CLICK FIX!!)

Simply write your essay/novel/She’s The Sheriff fan fiction in UX Write as normal, then save as HTML. Then, if you want to use it in Microsoft Word and save it as a .doc file, you just open the HTML file in word…then click on the ‘Print Layout’ button near the bottom right corner, and save as a ‘Word Document’. Boom, you now have a .doc file of your novel that you wrote with Autocorrect on your iPad.

Even better, UX Write’s developer says he’ll have the option to save your work as a .doc file on the app in a few months (Feb/March 2013 at the time of writing.)

Plus, if you’re wondering which Bluetooth keyboard cases to get for your iPad, I can recommend these, in particular the Logitech Solar Folio, as not only is it ambient light powered and solar powered so the battery never runs out, the layout of the keyboard is excellent, but the others are good too: 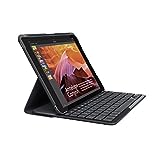 Or even better, check out my novels that I wrote on my iPad, and using UX Write, no less! These are available on the Kindle Store, readable on Kindle devices or the Kindle App for smartphone and tablet PCs. Click on the links below to find out more! :-)

In The Darkness, That's Where I'll Know You: The Complete Black Room Story
Buy Now

And here are some of my other articles: