How to make a green screen

Green screens A.K.A chroma screens are a great way to add that extra pow to your videos. I know if you are reading this article you are currently trying to build one or about to give up out of frustration. After many hours and clicks of the old youtube I still failed. I gave up and went with a white screen. But I still had a taste for the old green. I needed to be able to key to be free. So here we go. 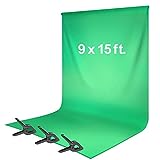 Learn how to use your camera. Don't bother building the green screen until you can control the aperture and all the settings on whatever camera you are working with. Just print a piece of green paper and take an action figure or even like a phone outside on a sunny day. Set up a miniature studio using the sun. Every camera is different and has some kind problem. For example changing the aperture on my T3I camera involves using two buttons pushed at the same time.

If it's cold outside just film by a window with the sun. I wouldn't bother setting up inside lamps as this will distract you. The main goal this day is to figure out the buttons. Do a few test shots and make the goal.

Room to work with

Will you be leaving this green screen setup or do you have to move it around? If at all possible pick a room that is at least 16 feet wide. This is the bare minimum for a full body shot. Try using your garage if possible. Remember once the studio is set up you any noises in the room maybe picked up by your audio mic.

How to make retrofit shop lights

Now for lights. Go with T8 Shop lights. I wasted a lot of time mixing some expensive lights with homemade lights. For your green screen studio just get all the lights at once. My set up has a total of 18 shop lights. This will run you about 200 bucks.

I have two shop lights on top of each other to form a long light pointed at the screen.I tried to hanging lights from the ceiling to light from above but the lighting came out all messed up. Theres an app called Green Screener for the Ipad that does a great job at helping you make your green screen even. Don't worry about making it perfect. Just keep filming shots and see if they key on adobe after effects. It will be a few days of trial and error.

Now when you add the lights for the actor this may change your green screen from being even. In professional studios there is a great deal of room the light does not make it to the green screen. Once again just keep doing trial and error. Just film some clips and see what keys out. Its during this time that most people give up. They just can't find the balance to get a constant green screen.

I went back to using a white screen during my first green screen attempt. But if I can do it anyone can do it.

Now key the footage you filmed. There are a plethora of applications out there to key but I found via youtube videos how to use Adobe After Effects 6.0. Now at first I tried to key using final cut pro. This provided okay results. I stress the word okay. The boarder of the body was either very grainy or a bit too diffuse. Its actually a cool effect for something like a ghost. For the majority of green screening this will not do.

From first glance after effects looks rather complicated. Watch a few videos online step by step and give yourself at least a day to test this out. Just play around with some footage. Beware the rendering on adobe after effects can take awhile and you cannot use your computer for multitasking during the render. Also make sure what you export can be used by your editing software. For example I exported this huge file that could not be read by final cut pro. I had to watch another video explaining how to do that part.

Great How To Use After Effects Video

Now you can set up a screen. What is your goal here? Do you want to film just close ups or full body shots. If you want to film multiple people you will need what's called a cyclorama. If you need something of that nature I would suggest at least renting a studio once to see what your needs will be.

Now you can buy fabric, paper, or paint to make the screen. My setup uses just a roll of green chroma paper. It tears up easily but is usually devoid of wrinkles. The fabric needs to be stretched with clamps and for small studios I think it's a time waster.

The paper just goes on a pipe that costs around 4 dollars. I hung mine from the celling. Its an 8 foot ceiling which is pushing it for full body shots. I can pull them off but its nowhere near ideal.

Below is info on my studio. You can use this to reverse engineer a studio for yourself.

I wrote this piece just as a place to find all the videos to do the green screen. Youtube has some great stuff out there but it takes days to wade through it all. I'm happy to answer any questions about making a green screen. I just want to stress don't forget what your purpose was. You may decide you just need to rent a studio now and then. That maybe the best solution for many. But when you learn to make a studio it really does produce some wild projects. Have fun going green.

Below is a video of the history of green screening. It's a long watch but definitely very informative.