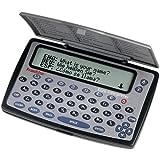 Franklin TG-450 12 Language Translator
This is able to translate between 12 different languages--Czech, Dutch, English, French, German, Hungarian, Italian, Polish, Portuguese, Russian, Spanish, and Turkish. In addition to over 400,000 words and phrases and 317,000 inflections, the translator also features a metric and currency converter. It also has a compact, pocket-sized design allowing you to take it anywhere you go.
Buy Now

Long gone are the days when foreign languages appeared to be incomprehensible and the only way to decipher sentences was through the tedious job of using a dictionary and translating word by word. Nowadays, with the aid of technology, any text or website can be easily translated within seconds with the click of the mouse. This effortless task is now possible courtesy of Google Translate.  Google Translate currently translates between 57 different languages. The service is free and its main goal is to make information divulged into the world wide web, universally accessible and useful. However,  there is much more to Google translate than simply translating a few chunks of words.

How to Use Google Translate

Using Google Translate is pretty straightforward. Simply performing a search on Google using the words ''Google translate'' or simply going to this ''link'' is all it takes to cause the tower of Babel to crumble once and for all. Here, users will find a page where there is clearly a text box where they can copy and paste text from a website. Once pasted in the text box, Google translate will try on its own to detect the language typed.

Once the language is successfully detected, users must select the language they want the text to be translated into by selecting it from the drop down menu. Now, users may click on ''translate'' and the text will magically start making sense, or at least will appear more comprehensible. Obviously, obtaining perfect translations is far from the scope of this tool, since each language has its way of structuring sentences and these are machine generated translations.

Other Interesting Features of Google Translate

Some extra features have made Google translate quite helpful for users. For instance, each word or sentence translated is accompanied by a speaker icon. Upon clicking on this icon, users may listen to a pronunciation of the word or sentence. This can be a big plus for those seeking to learn a new language.

Now, you can also search for websites in other languages. For instance, you may want to learn how to make your own pizza. Since the best pizza is made in Naples, Italy, by searching in English as you do regularly, you may miss out the authentic pizza recipes made there. Instead, by using Google translate you may also visit Italian websites and your search results will automatically translate the whole website for you.

Users at times may receive an e-mail in a foreign language and may wonder what it is saying. By using g-mail, any foreign email messages can be instantly translated into your own language. The feature is easy to use: any times g-mail detects text written in another language a header will show giving users the option to translate.

Users that tend to hop around foreign websites a lot will find the Google toolbar very helpful. The toolbar will have a translate button that when clicked offers a drop down menu of languages to select. The toolbar can be downloaded in seconds and for free from thislink. The toolbar also offers many other interesting features that can be added for convenience.

If you are a webmaster, you may want to make your website universally understandable. Google translations know offers developers the opportunity of exposing their website to a global audience. A translation solution can be engineered by using using the Google Translate AJAX API.

This feature is available for those who own an Android phone. All that is needed is a vocal two or four legged friend and an Android phone. The message from the animal is recorded and it will translated instantly. To get this application users must go to Android Market and search for "Translate for Animals''.The application is then installed and users must select ‘translate from'' and choose the animal from the drop down menu.

Users may select between cat, dog, bird, rabbit, guinea pig, hamster, tortoise, horse, chicken, sheep, donkey, and pig. Following that, users will tap on ‘translate to' and the language to be translated into must be selected. Now, the "Press to listen" must be pressed when the animal vocalizes.

The data is then processed and compared to hundreds of recorded noises in Animal Linguistic Database. Once a match is made, you will see a translation appear or if you want, you can actually hear it by pressing the speaker button. Google clarifies that it does not take responsibility if pet owners are disappointed about what the animal says! Of course, this application had to come up on April Fool's day!