Imagine being on vacation and finding out you have a chance at meeting a new client overseas if you can figure out a way to talk to them on Skype within the next 4 hours. That is the situation we found ourselves in. We had a laptop and an Internet connection. After a little digging we found that our laptop had no internal microphone. Yikes. The cell phone headset would not work. It was a single plug and the Laptop had separate jacks for speakers and a microphone. Plus the plug was the wrong size for the jacks....too small.

Doing a little quick research we found a Best Buy store nearby. We ran over to see if we could get something, a microphone or a hands-free headset with microphone that would allow us to talk over Skype.

We found a clerk who was quite helpful. He pointed us toward a combo music, gaming and voice headset made by Plantronics. In fact right on the packaging it says it is optimized for Skype, Windows Live, and Yahoo! messenger. Caching! The Plantronics Audio 355 multimedia stereo headset was just the ticket. 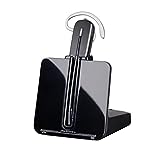 Having never used a headset on a computer, we did not know what to expect in terms of setup and use. There were no disks with drivers or instructions that amounted to much of anything but a warning about turning up the volume too high.

Turns out there is not much to set up. You need to make sure you match the icons on the gaming plugs with the Laptop/PC jacks to make sure the headset and headphones get the right signals.

We then started up Skype and ran the sound/microphone test. You can call the test center, make a recording and it will play back your recording. This verifies the functionality of the voice and microphone interfaces. Our test was successful...and with about 10 minutes to spare.

(In case you were wondering, the call was terrific. We got the order and it was well worth the $30 investment!)

The sound quality of the Plantronics 355 head seat was terrific. I could hear very clearly thanks to the dual earphones and in listening to my recorded voice, it sounded like the microphone worked as well. In my conversation on Skype, there were no problems with the discussion. I wasn't asked to repeat myself because the other person could not understand what I was saying so I'm assuming they heard me just fine. Overall I was quite impressed.

Other Uses for the PC Headset

With this experience using the headset, we thought of more uses for this pc headset. For instance, while driving home in our car from our vacation, my wife was trying to have a conversation on her cell phone with another client. Between the road noise, the DVD players and just being too tired to concentrate, it was difficult to hold a conversation.

It occurred to me that having a full headphone that would block out the external noise might make it easier to hold a conversation with the cell phone while on the road...so long as you are not driving! The problem was two fold, first the PC headset had 2 plugs. Our cell phone had only 1 jack. Second was a size compatibility issue. The PC plugs were 3.5mm in diameter. The cell phone accepted 2.5mm plug.

Again, thanks to some Internet research we found there was a solution. Something called a headset buddy adapter. It has 2 3.5mm jacks on one end and a 2.5mm plug on the other. Thus it converts from a PC headset to a cell phone headset. This means about $10 you can convert your high tech Plantronics PC Gaming headset into a high end and quiet cell phone head set. That's going to be my next purchase.

Thinking about this, I can now do some podcasting, I can make videos and add my comments etc. Time to get busy!