Should you drop your current carrier?

Shopping around for new cell phone service can be complicated and come with many uncertainties. You've probably had some experience with at least one major service carrier such as AT&T or Verizon Wireless. You probably have also had to deal with 2-year contracts and high monthly bills, sometimes with hidden fees and surprises. If your wallet is deep then your off to a great start. You only need to worry about which company has the best value and service for your dollar. If however you're like me and on a tight budget, you want the best service that you can afford and still feel like your not being cheap.

Sometimes having an inexpensive plan doesn't postulate bad service and lousy phones. In my experience since buying my first cell phone in 2000 while living abroad in Germany, I have come full circle from where I started 12 years ago. My very first phone was a prepaid cell phone that I bought from T-Mobile for roughly $20. I would buy prepaid cards as I needed them which was very inexpensive and infrequent. There were no other fees or contracts. Of course back then there was no text messaging, touch screen phones, apps, or even wireless internet.

Today most people want or need the latest gadget with all the bells and whistles. Whether your an Apple, Android, or even Windows fan, you want the newest features, apps, and fastest phone. So do you need to have the most expensive network and service to come with it too? I conducted some research to find out. This list is by no means comprehensive. Here is the breakdown between the major service carriers and most popular prepaid carriers:

* Ratings based on toptenreviews.com's reviews.

**Smartphones and smartphone plans only.

***Starting costs not including taxes and surcharges. Includes activation fee.

**Smartphones and smartphone plans only.

So the question stands: should I go with a major carrier or a prepaid carrier? Let's look at the iPhone 4S. Most carriers carry it and it is a very popular phone. So far we can rule out Cricket and Boost Mobile as they do not currently carry Apple phones. Virgin Mobile does and so does all the major carriers except for T-Mobile. As a quick side note, Virgin Mobile does not allow customers to use non-Virgin Mobile phones on their network such as unlocked phones. Going through each major carrier's website shows that if you went with a two-year contract and their basic plan, the Apple iPhone 4S is typically free or hugely discounted. With prepaid, no-contract services however, customers must buy their phone at retail cost up front.

To break it down even further, let's say we wanted an iPhone 4S with at least unlimited talk and messaging and at least 2GB of data per month. Which service is the most affordable?

Through my research, I'm actually surprised at some of the plans. I'm still glad I made the move several years ago to a prepaid service. It's pretty clear that the larger upfront costs pay off in the end. If your trying to find ways to save extra money each month, I would suggest looking into prepaid phone service.

I've been a customer of Verizon, T-mobile, and Sprint over the years. I preferred T-mobile for the longest time but now I completely favor Virgin Mobile. Looking at the pricing breakdown, I shudder to think how much money people waste on phone service.

My wife and I have been customers of Virgin Mobile for over three years and never had any major issues with them. I recently drove cross country from Oregon to Florida (where I currently live). I had service the whole way except for driving through the Cascades in southern Oregon and most of the way through Nevada. I listened to music using the Pandora app and connected my Motorola Triumph to my car stereo system. My wife and I did our research before buying and waited until they went on sale before we bought our phones. The Triumph is by far the best phone I've owned so far.

After going through all of the different plans offered by the popular service carriers, I will stick with Virgin Mobile. For my family, it's hard to beat the deals that Virgin Mobile offers. With the new addition of iPhone service, my wife will be happy too. For me, I'll stick with Android. 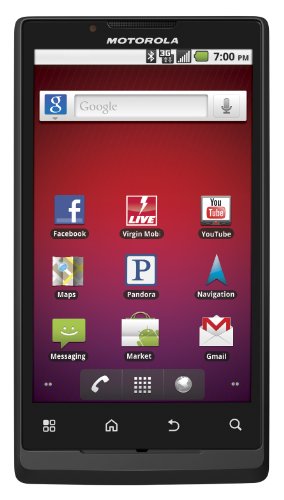 Which carrier do you prefer?