A review of the Google Nexus 7 tablet

A new standard in quality and affordability?

Yes! The Google Nexus 7" tablet is my first foray into the land of tablets. I expect this will be the case for many people. The price is low enough and the quality good enough to persuade many people who have been tempted by a tablet but felt they could not justify the outlay to finally give it a try. That's not to say there haven't been other tables at a similar price but this one really raises the bar for on build quality and speed at the lower end of the market.

I've played around with iPads that belonged to other members of my family but never felt inclined to buy one for myself. The main reason being a combination of cost and purpose. Although I could see they were fun for games and couch surfing, reading news etc etc I couldn't justify to price tag of an iPad and I know many of the cheaper tablets were just dross. Also on a more philosophical level I didn't like the restrictive nature of the iPad and the complete control Apple had over it. I have mixed feelings about the 'walled garden' approach, I think for some people and some situations it's great to have centralised control of a device and the reliability that brings. But back to the Nexus.

I decided to take the plunge after seeing some positive reviews. I had a few concerns about the size of the 7" screen but these have proved unfounded.

The packaging is excellent. Google have clearly been paying attention to the care Apple takes over the presentation of its products and care about those import first few moments of ownership. The textured black box feels nice, but perhaps not as nice as Apple's product packaging, but then we are talking about a device that is about half the price of an iPad, not to mention one has to be weary of copying the design, look and feel of any device, especially one of Apple's. The micro usb cable, charger and quick start guide are neatly packed underneath the tablet. The box is barely larger than the device in its length and breadth.

The device itself looks good too and fits nicely in the hand.

This was my first experience with Android. If you're not sure Android is the name of the operating system the Nexus 7 uses. The operating system bring together the hardware and software and puts you, the user in control. Android has been developed by Google as an open source operating system meaning other companies or people can make changes to it and use it on their own devices. This is why you'll see Android smart phones from different manufacturers looking different or working in slightly different ways. (Each version of Android gets given a new name. You may have heard of Honeycomb, Ice-cream Sandwich and Jelly Bean. In effect Honeycomb was version 3, Ice cream Sandwich was version 4 ad Jelly bean is version 4.1, tweaked for better performance of the user interface including making pages slide more smoothly.)

I frequently get too concerned with specifications for computer and other electrical gadgetry but with this device and tablets in general I've take a much more consumer orientated view.

The only spec I was bothered about was the memory. I opted for the 16GB version. There is no option for 32GB and 8GB would be too small. Having said that unless you want to load it up with movies 16GB will be plenty. I've installed a few games and lots of info apps that pull data from the web (such as footer scored, news readers etc) and there's really no issues at all. However, if I were taking a very long flight I'd probably run out of a battery before running out of movies.

The other technical limitation to be aware of is there's no 3G option. This doesn't bother me at all. I use the device either at home on wi-fi or maybe other people's houses on Wifi. I don't need connectivity on the train or out and about, for me I'm happy to sacrifice this feature for a lower cost device.

No rear facing camera wasn't a problem either. Front facing for Skyping is good enough and usually I never even bother with a video calls but that's more to do with the bandwidth between Australia and the UK where I make most of my calls to.

Also on the subject of processor I'm not that bothered about what drives the device. All I was concerned about was the responsiveness and I knew fro some other reviews that the Nexus 7 was fast. The magazine reviews were right. It's very nippy and I haven't experienced any frustration with the screen updating, sliding between pages or waiting for a tap to be recognised. I knew from other touchscreen devices that a pause between a finger tap and the action just kills the usability of the device. No complaints here on that front.

The case for a case

In and around the house I was not at all worried about the screen. But I wanted to take the tablet on the train and with with me when I went visiting family and friends (I know, I must be a great visitor). I tried this once and felt very uncomfortable carrying it without any protection. It was a lot of trouble making sure the screen was covered somehow during transit so I decided to purchase a case. 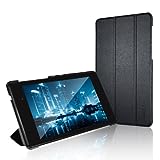 The Nexus 7 in a protective case

Some cases can be used as a stand

Android apps can come several sources, there no single store like the Apple App Store. Google has the Play store and Amazon have their own Android market place too. So far I've only used the Play store and smoothness of operation is impressive. There's a Play Store app preloaded ont the Nexus and this is easy to navigate and search. It's also simple for your kids to buy things if they get hold of your tablet and go browsing on their own, at least it is if you have credit on your store account. Luckily it's also easy to cancel purchases but you have to do it within 15 minutes of the purchase.)After delving into the Play Store app settings there's an option to force entering a PIN before completing a purchase.

You can also login to your Google account and search for apps, movies and books from their web site. The site is clean and simple and let's you install content remotely.

The huge range of Android variations has been used against the operating system in the past (most notably by Steve Jobs). People have been told it's a fractured system with lots of incompatibilities. The main issues being the variety of different screen sizes and resolution on the multitude of devices (and the situation is not helped by the code names used to describe each release of Android). The Play store helps with this by showing the compatibility status of an app you're thinking of installing. In this case Steve's Nexus is the name I gave my device. How accurate this is is hard to tell. I did once install an app that sized itself to that of a mobile phone screen before disappearing altogether. It was the first day and not a good start so I removed it but have had no issues since then. I canÃ­t remember the app and it was also before I'd noticed the compatibility checker (you can see it in green at the bottom of the picture included next to this text). Since then if I get the green light from the compatibility checker it's all been good.

iPads have a fantastic battery life and so far the Nexus battery life has been adequate for my needs which are usually restrictted to surfing in front of the TV at night, playing games, reading news and checking emails. I sometimes turn off Wi-Fi when I don't need connectivity. It's simple to do and the reconnection to the network when needed only takes 10 seconds or less so it's not an issue. I haven't bothered keeping track of when I charge the Nexus, I'd estimate I plug it in once every 2-3 days.

As I mentioned before there no rear facing camera and no 3G, neither of which is an issue for me. The charger cable is 95cm long, usb to micro usb, with the standard usb connection going into a power adapter and the micro useb going into the Nexus. I am dubious about the longevity of micro usb ports, they can be damaged by a reckless tug on the cable. I would have prefered full sized USB connector for strength and easier connectivity options.

Final thoughts on the Google Nexus 7

Google Nexus 7 Tablet is a terrific value tablet that punches well about its price point. You wonÃ­t be disappointed with this device, I've been totally happy with it and have found nothing to complain about. I was worried that after the first few dys the shine would fade and it would become a white elephant but having a tablet in the house is so useful. News, football score, games, Skype and so, it's very hand to ber able to do this from anywhere in the house. Of course, nearly all of these things can be done from a smartphone too but the bigger screen and better price point makes this a terrific device.