Many people look for the best monochrome laser printer for one simple reason: Inkjets drink ink! If you are not going to print fancy color pictures with real life quality and you mean to use your printer basically to produce written documents, purchasing a mono laser printer is a go.There are many types of laser printers out there. The ones covered in this review are all intended for average home and office use. In this review, I tried to impartially show the strong points as well as weaknesses of some of the best selling mono laser printers. This review should give you a general idea about the overall quality of each of these printers. It is then up to you to choose the one best fitting your needs.

What to look for in a Laser Printer

Printers have improved a lot from what they were some five years ago and they become increasingly cheaper. Some printer assets that was only to be found in dream printers in the past is now commonplace in laser printers and I say you should make sure these exist in the printer you buy. The first one is wireless connection or wifi. Although some may take this as a not so necessary extra, the facility of ordering a print at any point in your house is truly pleasing. Also, I would recommend you to look for the duplex printing ability. This allows you to print both sides of the paper without the need to manually flip each page. This way you will save trees and if, say, you are a grad student, you will not have the carry around tons of paper with only one side of writing. Memory allows you to print large files in one go. 32 MB is enough unless you are going to print 10000 pages of pdf at once or something like that. Printing speed is an important factor if you are going to print a lot. Also, in this case, you should pay attention to the toner costs of your prospective laser printer. Finally, some people find it important that the printer does not make too much noise as it prints.

HL2270DW is the best buy for easy, efficient and economic home and office printing. This printer has all the great features you need: Wireless and Ethernet connection ability to allow you to place it anywhere in your home. Automatic duplex printing so you don't have to stand there flipping the pages as they come out and a decent 32 MB memory, that is quite good for this price interval. In addition to these Brother HL2270DW has the highest page print rate among its peers: 27 pps, a remarkable speed to say the least. The toner that comes with the printer lasts 700 pages. Brother toners used in this printer cost about 45 $ and last 2500 pages each and that means 2 cents or less per page, making this a very economic printer in the long run. Brother has done a great job again and I would personally advise you to buy one of these if you want a decent, reasonably priced printer. 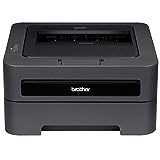 This is a very high quality printer albeit somewhat costly. As expected, 5370DW has the Wireless and Ethernet Connection plus Automatic Duplex Ability. Memory is 32 MB. Customers report it to be very easy to configure on both Windows and Mac. This printer has the best printing speed you can expect form monochrome laser printers: 32 ppm (page per minute). With all its high quality features, HL-5370DW sells a little less than HL2270 below. The reason is the higher price interval it belongs to. But it has another economic advantage that should make you consider making that extra payment. The TN-650 toner cartridge used in this printer runs up to 8000 pages, meaning a cost of less than 1 cent per page. This is the most cost efficient printer in the long term and can prove to be cheaper than its lesser brother if you are going to print thousands of pages. However, the first toner that comes on purchase runs out fairly quick.

This is also a great printer. It has Wifi connection. It has manual duplex printing, which in my opinion is not as good as automatic but better than none. You still have to do flip the papers all at once but printer gives you instructions so you won't make a mistake. Needless to say some people are skeptic about the functionality of automatic duplex printing and if you are one of them this can be a handy alternative. The memory of this printer is a bit dull: 8 MB. But I personally don't believe it will ruin your printing operation. HP 85A toner used in this printer is 67 $ and goes only 1600 pages, making every page over 4 cents. Sounds like a joke when compared to Brother, right? But toners for this printer have an advantage you should consider: Each toner comes with a new drum unit. Drum unit is the part of the printer that does the printing and you will have to change it from time to time and in other printers it can cost as much as a new printer. Plus, installing HP toner with drum unit will be easier than doing the things separately. This is great if you are not into hardware surgery.

Samsung ML-2525W has a decent 24 pps print speed. Memory is 64 MB, more than enough for anything. However, it lacks duplex printing ability, which is a big annoyance for those who don't want to waste tons of paper and who hate to flip sheets. This would still be a good piece of equipment had it not been for the blatant weaknesses it suffers. One major setback is that users have consistently reported failure to work with Macintosh, so if you have Mac best to avoid this one. Another important problem seems to be with the Wifi connection. When in a wireless connection, this printer simply goes to sleep after a few minutes and it can take quite some time and effort to get it running again. This effectively renders the Wifi useless and can be very frustrating if you bought it planning to place it away from the computer. Nevertheless, if you are on Windows or Linux and you have no problem with a cable connection, ML-2525W can be an option. There are many people very happy with this printer especially because it is much quieter than Brother HL2270DW.

This is not really a best monochrome laser printer but it is certainly one of the popular ones out there so I thought it apt to give it a few words. The reason ML-1665 sells good and its sole asset is the incredibly low price. Getting a printer so inexpensive, you shouldn't have much to complain about but your prospects should be equally low. Don't expect things like wireless connection or duplex printing from this printer and find a USB cable to connect it to your computer. The big thing that ruins ML-1665 is that the toner included finishes after only about 100 to 150 pages. This is a low count considering you bought this thing to print lots of pages cheaply. The new toner is at least as costly as ML-1665 so the price goes over 100 $, which you could have spent on a Brother HL2270DW in the first place. But it is cheap when you first buy it, I'll give it that.