It is strange that it has taken this long since Bluetooth has been one of the most asked for features for the Android Mini PC devices. It has taken almost half a year but iMito has added Bluetooth functionality to their new iMito MX1 Dual Core Android 4.1 Mini PC. Check out this review of the iMito MX1 to find out if the wait has been worth while.

The iMito MX1 is based on the dual core Rockchip RK3066 chipset, the same chipset that is used a few other Android mini computer devices such as the MK808, UG802 and Minix Neo G4. Performance of the iMito MX1 is expected to be more or less comparable to the other RK3066 based devices. However, the MK808 and UG802 are plagued with several problems possibly due to poorly designed firmware.

The MK808 and UG802 both have possible WiFi connectivity issues while the MK808 has an additional display stretching issue. The display issue can be resolved by updating the firmware but it seems that the WiFi issue has not been satisfactorily resolved yet. So although the iMito MX1 is a little late out of the RK3066 gates, if it got its act together on the software front, the MX1 may be the Android Mini PC on everyone's Christmas list this year.

All images courtesy of Amazon

The iMito MX1 Dual Core Android Mini PC is one of the first Google TV Box devices to offer Bluetooth connectivity and an attractive aluminum body that helps dissipate the heat.

Check out these great deals on the iMito MX1 on Amazon 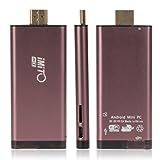 The dual core Rockchip RK3066 has proven to be a quite a fast performer. Unlike the older Allwinner A10 based Android Mini PCs that suffer from a little lag, the RK3066 makes everything zip along quickly. The RK3066 also works well running graphically intensive games such as Grand Theft Auto III and Shadow Gun. I have also shown in my MK808 review that it is ideal for running classic console emulators.

Most of the other hardware features of the iMito MX1 will be very familiar including a full sized male HDMI connector, 8GB of built in storage RAM, a standard USB port for connecting to USB peripherals including USB mouse, keyboard, thumb drive and webcam, a micro USB port that is used for powering the MX1 and a mirco SD slot that SD cards up to 32 GB.

The few features that make the iMito MX1 stand out from the rest of the RK3066 crowd is the built in Bluetooth, a body that is made from aluminum and Android 4.1.1 (Jelly Bean) OS firmware.

The aluminum body is also unique to the iMito MX1. Not only does the aluminum look real good and is available in multiple colors but the use of an aluminum body allows the MX1 to dissipate heat much better than a plastic body. Therefore it is not surprising to note that the iMito MX1 does not have any ventilation holes at all which in my opinion adds to its aesthetics.

The iMito MX1 Android Mini PC is one of only 2 Android IPTV devices that offer Android 4.1.1 (Jelly Bean) as the standard default firmware with the other device being the MK808. Most other manufacturers have decided to include Android 4.0 (ICS) as standard and later on offer 4.1 as a firmware update. The best thing about Android devices is the ease to swap out the firmware so the default firmware is not a big issue.

USB keyboard combos that work with the iMito MX1

A wireless keyboard allows you to control the iMito MX1 from the comfort of your couch.

For a detailed guide on the best wireless keyboard for use with the MX1 check out Best Wireless Keyboards for Android Mini PCs.

If you plan to use the iMito MX1 together with a big screen HDTV then the best way to navigate is to use a flymouse type of keyboard plus mouse controller. The flymouse allows you to control the cursor on the screen like a Wii remote by moving it in the air and if you need to enter any text, you can do it quickly and accurately with the built-in full QWERTY keypad. Highly recommended.

Another great mini wireless keyboard to pair with the iMito MX1. This one has a touch pad instead of air mouse function. On one side is a full 82 key QWERTY keyboard with backlight while on the other is a learning IR remote for 2 devices. Check out my full review of the keyboard here.

Logitech Keyboard Controller for Logitech Revue and Google TV
The Revue is designed for Google TV but works great with the Android Mini PCs as well.
Buy Now 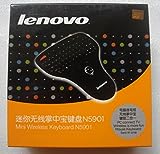 Lenovo Multimedia Remote with Keyboard N5901
If you prefer a trackball over a touch pad or air mouse, get the Lenova N5901 instead.
Buy Now

Logitech Wireless Touch Keyboard K400 with Built-In Multi-Touch Touchpad, Black, Standard Packaging
For those who prefer a full sized keyboard, the K400 is by far the most popular.
Buy Now

Like all the other RK3066 based Android Mini PCs, the iMito MX1 performs very well for web browsing, movie playback, movie streaming and gaming.

The Chrome browser is included with the stock firmware as is the default Android OS browser. Opening multiple browser tabs at the same time is not a problem and there is very little slowdown or lag. However, since the MX1 is an Android 4.1 device, there is no support for Flash by default. There is a workaround though that allows Flash to be added to the MK808 which is another Android 4.1 device which should work for the MX1 as well. A video of this workaround can be found on YouTube.

WiFi connectivity seems to be a little flaky on the iMito MX1 although unlike the MK808, it has support for WiFi 802.11n. I have read of a user who has managed to get up to 150 Mbps on a wireless N only router so we know for sure that wireless N support is there.

On the other hand, there are users who have reported difficulty in connecting to the router using WPA2 including YouTube reviewer of channel somecooltech1 fame. It is unfortunate that the quality can be a suspect in these devices and a poorly soldered part could be the root cause of such problems so we never know for sure if it is a quality, software or hardware design issue.

On the other hand, Bluetooth is a nice addition to your connection options. However, besides wireless Bluetooth mice and keyboards, I suspect we will have a similar issue with USB devices on the other Android Mini PC devices whereby not all USB devices will work and those that work may only partially work or require a certain set of conditions.

Until more people start to own Bluetooth enabled Android mini computer devices and start to provide feedback on which Bluetooth devices work and which don't, it is pretty much trial and error for now.

As for movie streaming, the iMito MX1 is able to play both YouTube and Netflix in full screen without the bottom bar. However, there seems to be slight skipping when playing HD video on both. It is not really serious but it is noticeable which makes it irritating. It is possible that video playback on YouTube and Netflix is not accelerated. The default generically named Video player however plays all video in full screen without any problems.

The Google Play Store is included in the stock ROM and it allows full access to most apps on the store including paid ones. This is in contrast to some of the other devices which come with limited access to the Google Play Store and require a firmware update in order to get the full version of the app.

Gaming is one area which has benefited from the inclusion of Bluetooth as the iMito MX1 works with Bluetooth game controllers including the PS3 Six Axis controller. It does require rooting but rooting an RK3066 device is fortunately quite a simple procedure.

Since there are many people who are interested in turning these Android Mini PC devices into cheap Linux computers I need to highlight here that unlike the older Allwinner A10 chipset based devices that had quite extensive support for Linux and had various flavors of Linux running stably within weeks, the RK3066 chipset does not have comparable support for Linux.

This is mainly because Rockchip, the manufacturer of the RK3066 chipset that powers the iMito MX1, has not released the kernel source code publicly. Without the source code, development on Linux for the RK3066 is crippled.

However there may be some good news as some Linux developers have managed to get a copy of the source code and are currently working on Linux for the RK3066. Development is still at its infancy at this stage and it is unknown if there is any legality problem that will threaten development later on.

Update: There has been a lot of progress for Linux on the RK3066 based devices. Check out the link below for information on how to install Linux on the iMito MX1.

Skype on the iMito MX1

A few iMito MX1 users have managed to get a few USB webcam models to run with Skype and I have listed the webcam models plus the firmware used if the information is provided. Please note that to get Skype to work, it is essential that the webcam gets enough power so please use a good quality powered hub or you may experience problems. The Skype version is also important as certain versions crash upon initiation of the call.

For a comprehensive compilation of compatible webcams and firmware versions for the iMito MX1 and other dual core Android Mini PCs, check out my guide, Skype on MK808, UG802, MX1, Neo G4 and MK802 III.

Microsoft LifeCam HD-3000
This true HD camera gives you bright and colorful video, and makes it easy to post to your favorite social sites.
Buy Now

The iMito MX1 has two things going for it compared to the other RK3066 based Android TV box devices. The first is the inclusion of Bluetooth connectivity and the second is an attractive looking aluminum case. However, both these features comes at a price and it is up to the consumer to decide if the price is worth it.

Overall, the generally good performance of the iMito MX1 is let down slightly by a possible WiFi stability issue. Since WiFi is an essential feature for such a device, I would suggest waiting for awhile and see if the problem can be fixed by a firmware update. However if you are comfortable with rooting and performing firmware updates plus Bluetooth connectivity is something you are looking forward to, you can take the plunge right now.

There is also a problem with YouTube and Netflix (possibly all streaming video) playback as there is slight skipping encountered with HD video. This could probably be fixed with a firmware update.

The iMito MX1 Dual Core Android Mini PC is one of the first Google TV Box devices to offer Bluetooth connectivity and an attractive aluminum body that helps dissipate the heat.

Which do you think is the best RK3066 Android Mini PC?