However, it is getting to be very difficult especially for the newcomers to distinguish themselves from the other similar devices that are already on the market. There is also little in terms of innovation of late except for the addition of Bluetooth support.

The makers of the MK812 Android Mini PC must have been well aware of the competition they are facing when they came up with the design of the MK812. Bluetooth has now become more or less a standard feature for such devices so it is no surprise to see it included. What makes the MK812 unique is that it throws in a built-in webcam and microphone.

To make the MK812 an even greater attraction, it comes with an external high gain WiFi antenna. If you are familiar with the Android TV stick devices, you will know why this is such a big deal. If you are not, I will explain in detail in the sections below.

These aren't the Droids you're looking for? - Move along to one of my other Android related articles below

Android Mini PC Buying Guide
There are just so many choices when deciding on an Android Mini PC. Find out the pros and cons of each model and decide on the best model.

iMito MX1 Android 4.1 Dual Core Mini PC with Bluetooth
The iMito MX1 has a dual core CPU, WiFi and Bluetooth. In fact it is among the first to offer Bluetooth connectivity.

Uhost2 (Probox2) Android Mini PC Review
The Uhost2 or Probox2 is the highly anticipated dual core update to the original Uhost. Find out if it meets expectations.

Must Have Apps for Android Mini PCs
Do you have a hard time figuring out which are the best apps for your Android Mini PC? Read this guide and find out the must have apps.

Unboxing and First Impressions of the MK812

The MK812 comes in a simple black box. In the box is the MK812 Android Mini PC itself. At first glance, the MK812 bears a striking resemblance to the iMito MX1 with its aluminum body. It has been reported on the ArmTvTech forums that the MK812 is partially compatible with the MX1 firmware so the resemblance could be more than just visual.

The MK812 itself comes with a standard sized male HDMI port on one end and on the other end is a standard USB host port and the connector for the external WiFi antenna.

On the side of the unit is a microSD/TF memory expansion slot, a micro USB/OTG port, a reset hole and the built-in microphone.

On the top of the unit is where the 2 megapixel camera is located.

The attractive features of the MK812 is not limited to just the webcam and external antenna. Inside, the MK812 comes with 2GB DDR3 RAM which I believe is a first on an Android TV Stick form factor device. All the other devices I have come across only came with 1GB of RAM.

Last but not least, the MK812 is also one of the few devices that comes with Android OS 4.1.2 (Jelly Bean). This is not the latest version of Jelly Bean but it is just one version behind the current version 4.2.

The included external WiFi antenna is a high gain 3dB antenna and it has a magnetic base that lets you stick it to any magnetic surface.

Pick the best wireless keyboard for the MK812 based on your preference for either an air mouse or touchpad type keyboard and other important features to consider. Check out the Best Wireless Keyboard for Android Mini PC article for a detailed guide. 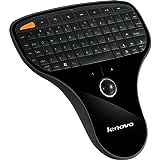 Lenovo Multimedia Remote with Keyboard N5901
Another mini wireless keyboard but this one comes with a trackball instead.
Buy Now

MK812 Set Up and Performance

Setting up the MK812 was relatively easy but an unexpected problem was encountered.

Plugging in the power, a wireless keyboard with touchpad and the external antenna was easy. The problem was with positioning the webcam on the MK812. The included HDMI extension cable was too short and does not allow the flexibility of positioning the MK812 with the camera facing the front of the TV. If the TV that you are using has a HDMI port at either of the edges of the TV, this might not be an issue but unfortunately mine doesn't.

Fortunately I have spare HDMI cables that are longer (about 1m) so I got the problem resolved quickly. If you do not have a TV with an edge HDMI input you might want to get a longer HDMI extension cable together with your MK812.

Boot up and initial impressions

Boot up was comparable to other RK3066 based devices taking less than 30 seconds. There is no customized launcher and only the standard Android launcher is available. A plus point is that there aren't any extra Chinese apps that are pre-installed into the MK812 as well. Only essential apps including a full Google Play Store app is installed.

There is also an AirPlay app that lets you connect to and stream media files from your iPhone or iPad. It is similar to the AirPlay app from Apple except that it does not support mirroring.

One of the most documented problems with Android Mini PCs is poor WiFi connectivity. Problems range from problems connecting to a WiFi network to weak WiFi signal to slow WiFi speeds. There are dozens of forum threads that discuss on the cause of the problem (both software and hardware) to workarounds (using a USB LAN adapter) to modifying the hardware itself by isolating the WiFi antenna.

The MK812 provides a sure fire solution - an external high gain WiFi antenna. With the antenna attached, the MK812 has no problem connecting to the WiFi router and the download speed is the best I have come across so far.

If you have read about the WiFi issues and have been holding back on getting an Android Mini PC, just get the MK812 and cast your fears away.

I will not be covering video playback and streaming in detail as the performance is similar to the other Rk3066 devices that I have reviewed so far. In a nutshell, this means that the MK812 can play most if not all video formats including 1080p files. There is still no support for multi channel surround sound as the audio is downsampled to only stereo.

Streaming videos from YouTube and Netflix, the two services that I tested the MK812 with, worked fine. I did not encounter any drops or buffering during playback which is to be expected.

Since the MK812 comes with both a built in microphone and webcam, setting up the MK812 for Skype couldn't be easier. Instead of finding a compatible webcam and playing around with custom firmware to find a working setup like you normally would, all I had to do was to download Skype from the Android Play Store and I am good to go.

In my setup, I am sitting about 6 feet away from the TV where the MK812 is located. The built-in microphone had no problems picking up my voice although it is located quite a distance away. I conducted a few tests and the other party had no problems with the audio and the video quality is also quite decent although it cannot compare with a HD webcam setup on a laptop.

I also tried out the microphone with Google Voice Search but my results are mixed. The MK812 could only pick up the correct words about half the time. I must admit that I don't get very good results even on my Android phone but I would say that my phone gets it right about 70-80% of the time. I always find Voice Search to be a gimmicky feature so this is not something I am concerned about.