Superzoom or DSLR? Selecting One That's Right for You

Both DSLRs and Superzoom Cameras Offer Advantages Over a Compact

If you're thinking about upgrading from a simple compact camera and are torn between a superzoom and a DSLR, your quandary is not surprising. Both offer advantages you won't find in a standard compact. So which one should you choose? The answer depends on many things, including how much interest you have in creative control and what type of photos you'll be taking.

Here's the good, the bad and the ugly when it comes to comparing superzoom vs DSLR.

The best thing about a superzoom is undoubtedly the focal range, making it a great option if you like to take photos of birds and other wildlife, or if you shoot a lot of sports photos and want to be able to get closer to the field or court.

It's also great for those who don't like the bulk and weight of a DSLR, anyone on a budget, and folks who are more comfortable with compact camera simplicity.

Here are four reasons to love a superzoom compact camera.

How Close Can You Get With a Superzoom? - Untouched images show comparison with a typical zoom lens

The Superzoom Camera I Own - Panasonic Lumix DMC-FZ200

There are a lot of superzooms on the market now, but they're not created equal.

The camera I chose is the Panasonic Lumix DMC-FZ200. Every SLR/DSLR I've owned since the days of film have been Canon, so why didn't I go with a Canon superzoom, specifically the Canon Powershot SX50, with an unbeatable 50x superzoom? One word: aperture.

The Panasonic FZ200 "only" has 24x optical zoom (25 -600mm equivalent) compared to 50x (1200mm equivalent) on the Canon. But the Panasonic has something more valuable to me - full f2.8 brightness across the entire zoom range. That means I can zoom to 24x (600mm) and still use a fast 2.8 aperture with a low ISO to achieve maximum speed and the smallest depth of field.

The Canon, like most other superzooms, can't do that. The SX50 has an aperture range of f3.4 to f6.5. What that means is that your depth of field changes as you zoom, and as the f-stop numbers go up, your shutter speed must go down and/or your film speed must go up to compensate for less light coming into the lens. It makes it harder to take crisp action shots of moving objects (such as at sports events) or to use a low ISO to get the clearest image with the least "noise" (or graininess).

The ability to maintain f.28 aperture across the full zoom range makes the Panasonic one of the best superzoom choices on the market. CNET called it "the megazoom that has it all" and dpreview.com said it's "darn close to perfect." I highly agree!

If you have any interest in professional photography or if you simply want the most creative control, a DSLR is the only way to go. They're fast, have the most creative options and take the best quality photos. Here are three reasons to choose a DSLR.

More Sample Images - Another comparison for your review

As much as I love my new superzoom, there's no way I'd ever trade in either of my DSLRs for a compact. No way. A compact camera simply can't take the same quality photos as a DSLR due to the smaller sensor inside. If you really want the best quality, a DSLR (and particularly a full-frame DSLR, if you can afford it) is the best option.

I have always been a Canon owner and currently have a Canon Rebel T1i and an EOS 7D. I mostly use the 7D. What I love most about this camera is the speed. When I turn it on, it's instantly ready to shoot, and there's no waiting for the lens to focus. My biggest complaint about the Panasonic is focusing speed. Sometimes it's great. Sometimes it has a hard time locking on a subject. I never have to worry about that with my DSLR.

That's why a DSLR is priceless when it comes to capturing spur-of-the-moment shots. My Canon can also track moving objects MUCH better than the Panasonic, and the image quality is (of course) better because it has an APS-C-sized sensor vs. the much smaller sensor in the Panasonic. 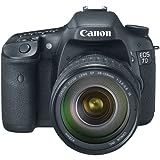 So Which One Should You Buy?

If you're serious about photography, a DSLR is always going to be a better - but pricier - choice. However, if you need extended focal range and can't afford a DSLR with a long zoom lens, a superzoom camera is a great backup.

Other Pages You Might Enjoy - More photography articles by lisadh

Superzoom or DSLR? Selecting One That's Right for You
If you're thinking about upgrading from a simple compact camera and are torn between a superzoom and a DSLR, your quandary is not surprising. Both offer adva...

Ideas for Self Portraits
Photographers are usually most comfortable behind the lens, focusing their camera on other people and subjects. But taking self portraits can be a lot of fun...

How to Remove a White Background From an Image
Photoshop Elements is one of the most popular photo editing and organizing programs on the market, and it offers an incredibly easy...

Why Underwater Disposable Cameras Aren't the Cheapest Option
Film cameras haven't quite joined 8-track tape decks in the pile of obsolete consumer products, but most people have abandoned film in favor of more advanced...

Why the Contour ROAM2 is a Great Camcorder for Moms
You've probably seen commercials advertising "sports cams" or "action cams," those tiny camcorders that athletes and adventurers like to ...

What Do You Think - Superzoom or DSLR? - Leave a comment!