You Will Love The Harry Potter Remote Control Wand

Harry Potter fans are going to love this remote control for their television. Imagine, lounging on the couch and, with a flourish of your wand, changing the channel.

A novelty gift item that is a perfect Christmas gift idea for fans of Harry Potter, wizardry and magic lovers everywhere.Kymera's wand remote control allows you to be the wizard. You can master any of the items in your home for which you have a remote control including but not limited to your television, ceiling fans and lighting. The wand will memorize up to thirteen remote control codes and allow you to use them according to your gestures. You will be able to turn things on and off as well as up and down.

Your wand will arrive packaged in a beautiful box with detailed instructions.Mugglenet.com, the fan website devoted to all things Harry Potter, finished their discussion with, "The Kymera magic wand is truly a puzzle piece of engineering." I agree...read on to decide what YOU think. 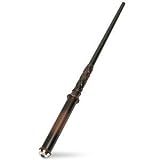 This commercial for Harry Potter's wand is a BLAST (pun intended) watch as Harry and his nemesis from ThinkGeek battle it out for control of the television...

Buy Your Kymera Remote Control Wand - From the sellers on Amazon.

From a satisfied customer on Amazon.

Amazon customer reviews are a great way to judge the quality of a product. Customer K. Schlitz Nanney says that she purchased this remote control or magic wand for her husband who loves Harry Potter and remote controls. He was pleased and set about teaching it the commands it needed to know right away. She finds it a bit hard to get used to but she is not enthralled with HP the way he is. He has a lot of fun with it and enjoys showing it off to guests. The watch arrived in a lovely box which can be used to store and to display the wand. Nanney recommends Kymera's magic wand for anyone who loves magic and remote controls.

Would you have fun with this wand remote control?